SINGER GRAHAM BONNET DISCUSSES ALCATRAZZ, HIS CAREER, AND HIS UNIQUE IMAGE IN THE 80’S, STATING “IT WASN’T MY PLAN TO BE WEIRD” 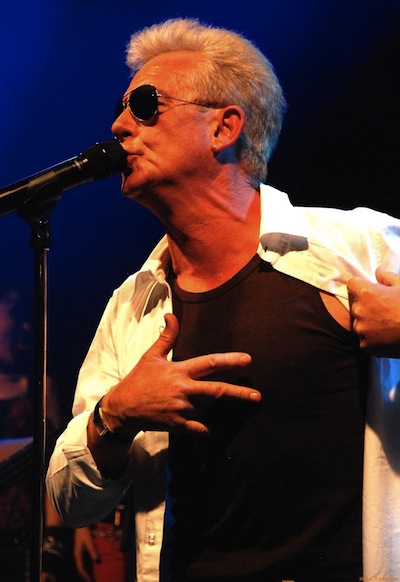 Sleaze Roxx: You’ve been doing Graham Bonnet Band for sometime now. What was the inspiration to relaunch Alcatrazz?

Graham Bonnet: I thought that by doing so, we would probably get more interest. The name Alcatrazz has more recognition than my name I think. A lot of people don’t know who I am. They’re like, “Who is this Graham Bonnet person?” [Laughs] I think unless you’re a hardcore follower of what I have done over the years, I’m not a recognizable name. I have some of the guys back in the band that were in the band before, except our drummer who has completely retired from the music business. He doesn’t even play drums anymore. We’ve had so many guitarists over the years that I wouldn’t want to ask any of them anymore, because they have their own careers. Well, two of them, at least. Yngwie Malmsteen and Steve Vai. So, to answer your question, I figured that if we used the Alcatrazz name, we’d do better when we went out and played live.

Sleaze Roxx: When you set out to relaunch Alcatrazz, was it hard to convince [bassist] Gary [Shea] and [keyboardist] Jimmy [Waldo] to be a part of it?

Graham Bonnet: Jimmy had been playing with me already with The Graham Bonnet Band, but Gray was semi-retired, but he was asked to come with us to Japan to do a couple of songs with us. We did some Alcatrazz songs. He loved it so we took it a bit further. It’s ‘almost’ Alcatrazz but not quite. I think this is as close as we’ll get at this point. Now, will we ever play live with this line-up? I don’t know when that would ever be at this point with the virus still around. Gary didn’t play bass on the album. Other people did that on the album. He knows the songs. We may have to wait up to a year to book shows! Who the hell knows with this virus [laughs].

Sleaze Roxx: The one thing that sets you apart from the other hard rock singers early in your career and even now is that you had this different image. You had short hair and a clean cut look. I remember as a kid I was talking with this friend who had seen a music video, but he had forgotten the name of the band, he said “Yeah, it’s this guy with short hair and [he] looks like he was the guy from ‘Miami Vice.’ I don’t recall the name of the band, but it was awesome.” I said,”Oh, that’s Graham Bonnet. It’s Alcatrazz.”

Graham Bonnet: [Bursts into laughter] I must have been wearing my Beach Boys shirt [laughs]! That or it was the suit with the thin tie [laughs].

Sleaze Roxx: In retrospect, it worked because it gave you an identifiable trademark. You have the voice and you have a unique look. Was the image done by design? I know prior to getting recruited by Rainbow, you had a career doing music that was on the lighter side. So, was that Graham Bonnet bringing that ’50s-’60s image to hard rock music?

Graham Bonnet: It wasn’t my plan to be weird or anything like that. I cut my hair at the suggestion from my then girlfriend. She said, “Why don’t you do something different?” My hair used to get in the way when I was recording, and I was using headphones, so I went for it. I went for the button up shirt with jeans. It was a very 1950s style, which fit in the sense that it was the music that I grew up on. When I was a kid, I would listen to Little Richard, Buddy Holly. I’ve always liked that kind of music and the style of the time or fashion if you will. I stuck with it because it’s what I was I was comfortable with. When I went for the audition with Rainbow in London, I said to my manager, “You know, I’m not going to fit with these guys. I just don’t think I’m the right guy for this.” They looked different than I did and I really didn’t think I was right for that band. I had never heard of them because I was in my own world. I never listened to hard rock or heavy metal or whatever.

Sleaze Roxx: I was wondering going into Rainbow, how familiar you were with them and Blackmore’s work in Deep Purple, and with Schenker, were you aware of his work with Scorpions and UFO?

Graham Bonnet: I think by the time I went to work with Michael, I had heard of UFO and Scorpions, but they just weren’t my thing. I loved The Beatles, The Beatles were my thing, also The Rolling Stones, The Who, The Kinks, that kind of music. It wasn’t anything heavy or of a particular genre, The Beatles did everything from Helter Skelter to When I’m 64 for God’s sake. That’s how I styled myself for my solo albums…Getting back to Rainbow, I didn’t think I was going to fit because they were in one drawer and they wanted to stay there. My manager had me work with Roger Glover and the rest is history, I guess.

Sleaze Roxx: Going back to Born Innocent, you have some guests and some guest songwriters. Steve Vai, Chris Impellitteri and Bob Kulick contributed and performed on the album…Was it hard to get those guys that you worked with in the past to either contribute or play on the record?

Graham Bonnet: It was actually easy. All three of them said they’d absolutely do it, but none of them wanted to be in the band [laughs]. I understood. They all have their own thing going and they are doing quite well on their own. I asked Steve if he could write something and he sent us 60 songs. That’s right 6-0. They were arrangements and we picked out one song from him and went to work. Bob Kulick sent us three to four songs. We picked two of his and Chris sent me one and it made the record. It’s good to have friends like that. It’s like old times when we got together with them.

Sleaze Roxx: Bob unfortunately passed [away]. He sent you the three to four songs and you picked two of them. [Had] you kept in touch with him over the years?

Graham Bonnet: I got in touch with him again when we were playing in Vegas. I heard that he was living there and I asked him to come up with us to do a couple of songs. He did and after that I asked him if he had any songs and he sent me the songs and he was featured on the record. It was as simple as that. I just can’t believe he’s gone. I had known the guy for such a long time. He was just such a lively and interesting chap. He was always so full of life. He always had problems with girlfriends and whatever, he seemed a bit depressed… I often wonder what really happened to him. It was unexpected and shocking when I found out that he passed.

Sleaze Roxx: How did you land on Michael Schenker’s radar for the Assault Attack album?

Graham Bonnet: I was dragged into that band by Cozy Powell. I went to see them play after I had left Rainbow. I wasn’t doing much at the time and I went to a club here in LA. MSG happened to be playing and after the show was over, Cozy asked me, “Hey what did you think of the band? Did you enjoy the show?” I said, “It was great. You’ve got a great band there.” Cozy then turns to me and says,”Would you like to be in it?” I said,”Doing what?” He said,”Singing.” I said, “Look you’ve got a singer.” He says,”I think he’s going to go.” I don’t recall the reason why he was going, but he was leaving. I asked him, “When would you need me?” He said,”As soon as possible.” So. a couple of months went by and I got a tape. A cassette tape, remember those things?

Sleaze Roxx: I try not to.

Graham Bonnet: [Laughs] So, I got a cassette tape in the mail. It had four songs on it that Michael had recorded with Cozy and Chris Glen. I listened to the songs and I got to work on the songs. I flew to London and there was an argument between Cozy and Michael and then Cozy left, so then Ted McKenna came in, who is someone that we lost recently, too. I loved working with him. I love him. I really do. May he rest in peace. Great drummer and [an] even better person above everything else. He made anything he did an interesting story. He knew how to tell a story. I miss that. It’s been great playing with Michael again after being a part of an album that has received so much praise over the years. I have to say why [laughs]? I always find myself saying what’s so great about it? I had to go back and listen to the album now that I’m doing some of these songs live with him and I have to say that it’s a real treat. Michael Schenker Fest has been doing very well for us, it’s a fun show nearing two hours. We’ve had to put that on hold for the time being due to the virus.

Sleaze Roxx: Last thing and I’ll let you go. Back when you were in MSG, you had a bit of a debacle onstage which resulted in you leaving or being asked to leave the band. How did you overcome something like that, which took place in a public setting like that and got press coverage throughout the world? An incident like that could have ended your career.

Graham Bonnet: [Laughs] It absolutely could have. That’s why I immediately had to do my own thing. I can laugh about it now and think it’s a little bit funny. We were headlining a festival, I think it was Donnington. When I got back to London, my manager told me that they’ve fired me. I looked at him and I asked, “Well, if they do that, who’s going to do the show?” He says, “They’ve got Gary Barden back, he’s going to do the show. You’d better go back to L.A. and think about what you are doing.” I went back to L.A. and thought about what happened and put together Alcatrazz and moved on from that. Over time, we’ve made amends and now it’s just great to look over at Michael and see him smiling. It’s priceless.

To learn more about Alcatrazz, ,and their latest release, Born Innocent, click on the highlighted links within the story.