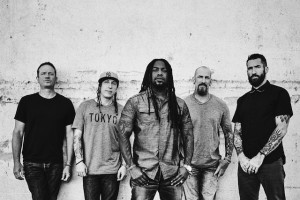 Musical innovators Sevendust continue to impress with their latest album Kill The Flaw creating another milestone in the band’s career. Sevendust has achieved their highest album sales chart position of their nineteen-year career. The album attacked the charts this week debuting at #13 on the Billboard Top 200 based on total activity of over 21,000 units. The album also shot to #11 on the Top Current Albums, #2 on the Hard Music Albums, #2 on the Rock Albums, and #3 on Record Label Independent Albums selling over 20,600 units the first week. Kill The Flaw is the band’s 11th studio album and was released via 7Bros. Records with ADA/Warner Brothers Distribution. The new album was self-produced by Sevendust and recorded at Architekt Music in Butler, New Jersey with engineer/mixer Mike Ferretti.

Sevendust recently made headlines on September 9th when they were featured in the latest Apple Keynote speech from the Bill Graham Civic Auditorium in San Francisco. Jen Folse, senior design producer and part of the Apple TV team, showcased Sevendust and their latest single Thank You during the finale of her promo of the new Apple TV. As she stated during her presentation in regards to Sevendust, “So you probably wouldn’t have guessed it, but I am quite the metal head and this is one of my favorite bands.” Thank You is already a Top 20 song at Active Rock in just a few short weeks.

Sevendust has been touring in support of Kill The Flaw. They are currently on the road as direct support on the Godsmack tour that tour wraps on October 19th in Ottawa, ON. The band is also playing Monster Energy Aftershock Festival in Elverta, CA on October 25th. Coming on the heels of the Godsmack tour, Sevendust has been tapped as direct support for the November dates of the Shinedown/Breaking Benjamin co-headlining tour. The band will join the tour starting on November 2nd in Sioux Falls, SD. The tour will be hitting Peoria, IL; Nashville, TN; and Little Rock, AR to name a few before it wraps up in Portland, ME on November 24th. Sevendust has been known for their amazing live shows as radio personality Lou Brutus recently stated, “The next time you see Sevendust perform at a festival, don’t watch them, watch the side of the stage, because you can bet every other band on the bill will be there taking notes & wondering how they got so f–king good.”

Sevendust formed in 1996 and have forged one of hard rock’s most diehard audiences. 2014’s acoustic offering Time Traveler’s & Bonfires saw an overwhelming response from that community, being quickly funded through a highly successful PledgeMusic campaign. Just a year prior, Black Out The Sun entered Billboard’s Top Hard Music Albums chart at #1 and landed at #18 on the Top 200. They kicked off their illustrious career with an untouchable string of three gold albums, beginning with their self-titled 1997 debut and continuing with Home in 1999 and Animosity in 2001. Along the way, they’ve sold out shows everywhere and given unforgettable performances at the likes of Rock On The Range, Woodstock, OZZfest, and Shiprocked!. However, the era of Kill The Flaw starts now.

Sevendust is comprised of iconic vocalist Lajon Witherspoon, the dual-guitar attack of John Connolly and Clint Lowery, and the driving rhythm section of Vince Hornsby on bass and Morgan Rose on drums.

Sevendust on the web: