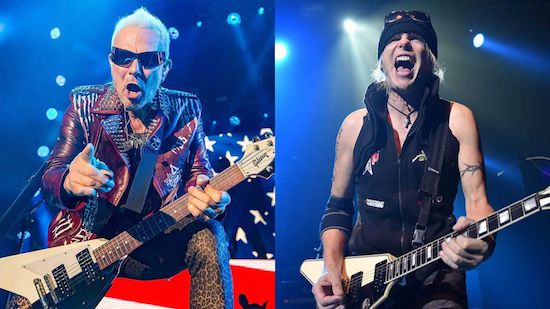 Scorpions guitarist Rudolf Schenker has finally responded to criticism over money matters from his brother Michael.

In 2016, Michael told Gigs And Festivals, “I’m actually very disappointed in my brother because I just found out that a lot of things have been incorrect in the past. Me, being seven years younger than the other guys, I think I was taken advantage of right from the beginning.”

Later that year, he told The Metal Voice, “Rudolf asked me to give him the melodies for [Scorpions song] Coast To Coast… and so I’m very disappointed with that. And I must say I’m now finding out more and more weird stuff about Rudolf.”

“Look, I love my brother,” says Rudolf. “He’s a fantastic guitar player but he knows nothing about business. When we made Lovedrive [released in 1979] the band was under contract to Dieter Dierks [producer and manager]. When I asked Michael to play a solo to my composition Coast To Coast, we agreed a half-and-half credit, but Dieter wouldn’t allow it – this related to publishing and studio costs.

Michael had a signed contract with Dieter that gave him one point on the song. And we agreed to pay Michael… he had the money.”

Schenker goes on, “But in 1985 when he was completely smashed and had a new MSG with Robin McAuley, Michael lived with me in my house. We flew in musicians, I did all of that for nothing on the understanding that Michael would pay me when a record label came in. But he didn’t pay me anything.

So I took his half to cover the bills he hadn’t paid. Everything is clear. All Michael has to do is ask, ‘What’s happening here?’ But he doesn’t; instead he gives these stupid interviews. I still love my brother but he has always hated business matters and the only person that’s to blame here is himself.”