SAXON’S NEW ALBUM “CARPE DIEM” OUT TODAY, LISTEN TO SONGS “THE PILGRIMAGE” AND “REMEMBER THE FALLEN” 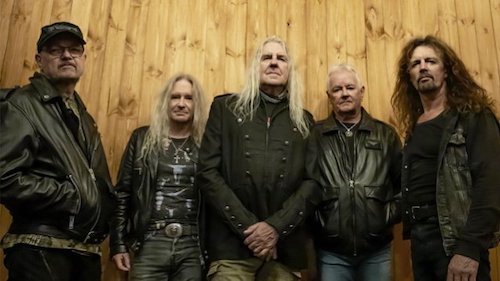 Saxon have released the third single, The Pilgrimage (see below), from their upcoming album, Carpe Diem, out today (February 4th) through Silver Lining Music.

“Pilgrimage is a fantastic word,” says singer Biff Byford. “People go on pilgrimages all the time, not just in a historical or religious sense, but it’s about going and visiting either a place that you feel is special in your life or somebody that’s meant something in your life. You can go on a pilgrimage to go see your great grandfather who died in the first world war, for instance. They’re journeys of great weight and importance.”

Produced by Andy Sneap (Judas Priest, Exodus, Accept), Carpe Diem strikes the ear as one of the most essential British metal statements of the last few years and not lacking in pace or bite, an album which will ignite the joy in stalwart supporters and attract a whole new legion to the Saxon fold.

Sneap, himself a guitarist and producer of some metal repute, ensures that Carpe Diem does not lack one ounce of grit or sharpness. “Andy’s obviously a very good guitarist,” says Biff, “but he’s not a blues-based guitarist like our guys are; he’s more of a modern-style player. And that means the boys (Paul Quinn and Doug Scarratt) love working with him because, again, it’s all about the intensity. Andy’s always pushing the envelope; he doesn’t let them get away with anything. They have to play it for real, full speed. He gets great sound, and we want that Gibson/Marshall ’80s sound even if they’re not Gibsons and Marshalls. We try and retain that British metal guitar sound that we created for Saxon, and he’s definitely an ’80s child.”

Despite a career which has spanned 44 years with over 15 million albums sold, including four top 10 U.K. albums, and having played to hundreds of thousands of fans worldwide, Saxon are revving up for one of their busiest eras yet.

“We’re gonna be quite busy this year,” says Byford. “There are festivals which have been rescheduled from two years ago, we’re looking to go to America, we’re also going to tour U.K. and Europe later in the year and like everyone really, we’re just keeping our fingers crossed that everything works out and we can do it all. We’re also recording the second  Inspirations album (hear their cover of the Rolling Stones‘ Paint It Black, here), and as we do that, you never know, we might write a few songs for the next Saxon album…”

“It’s been a difficult two years,” offers Biff with considerable understatement, “because I had the heart attack back in September 2019, so things went a bit pear-shaped for the band. And then COVID hit two or three months later, but luckily, we started writing and recording this album before COVID. We did the drums in Germany and we did the guitars in various places. I was doing a lot of writing while I was in the hospital bed, and we spent quite a long time writing and arranging the ideas that we all had. I do think it’s a very intense album, and maybe some of that intensity comes from the frustration of not being able to do anything in the COVID period.”

“We want every album we make to go platinum,” says Byford defiantly. “We never make an album that we don’t expect to be fantastic because there are no laurels around here, and as a band, we’re always trying to do something a little bit new, a little bit daring. I love fast metal like Princess Of The Night and 20,000 Feet, and I try and bring that style of Saxon into the music now, but in a more modern style. We don’t sound like an old band on records because we’re not sitting back on our past success, we’re always trying to make a great album.”

‹ JUDAS PRIEST’S ROB HALFORD, AND IAN HILL, DISCUSS THEIR ROCK HALL NOMINATION, DOWNING’S PRESENCE AT THE POSSIBLE INDUCTION, AND THEIR MISTAKE AT CONSIDERING TOURING AS A QUARTET; HALFORD TAKES OWNERSHIP OF THAT ERROR