JUDAS PRIEST’S ROB HALFORD, AND IAN HILL, DISCUSS THEIR ROCK HALL NOMINATION, DOWNING’S PRESENCE AT THE POSSIBLE INDUCTION, AND THEIR MISTAKE AT CONSIDERING TOURING AS A QUARTET; HALFORD TAKES OWNERSHIP OF THAT ERROR 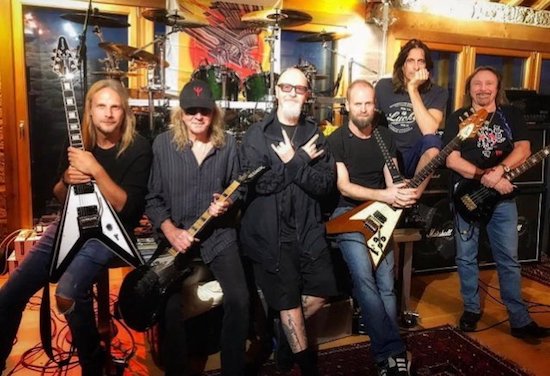 Gary Graff of Billboard spoke with iconic Judas Priest frontman/Metal God Rob Halford, and bassist Ian Hill, about the band, once again, being considered for a possible nomination into the Rock N’ Roll of Fame. Excerpts from the article appear below.

…First eligible in 2000 and long considered one of the Rock Hall’s most significant snubs, Judas Priest was first nominated in 2018, then again in 2020 and did well in the fan voting but has yet to make the final list of inductees. “You go ‘Meh. Meh. Next time,” Halford says, while bassist Ian Hill — the sole remaining member from the band’s original 1969 lineup — adds from his home in England that “your enthusiasm tends to curb a little bit when you’ve been turned down twice. The first time we were absolutely over the moon, and of course we didn’t make it and that was disappointing. We didn’t make it the second time, either, and if we’re turned down again, I’m sure we won’t be as disappointed as we were the first time around.”

For now, the group has adopted a “third time’s the charm” mantra, which has given Halford some additional reason for optimism. “I googled it and apparently it’s a British expression, and I thought, ‘Well, that’s useful.’ As I sent that off I thought about the Grammy; I said that about the Grammy, the third time’s the charm, and I think we got it [Best Metal Performance in 2010 for Dissident Aggressor]. And three’s a lucky number in numerology, so it’s got a lot of karma and good vibes hanging around those three digits. So maybe it will be the charm.”

If induction happens, Halford and Hill both say they’ll also be happy to stand alongside founding guitarist K.K.Downing, who parted ways with the band acrimoniously in 2011 and now leads his own band, K.K.’s Priest. “It’s not a problem to us, no,” Hill says. “Ken was an integral part of this band for a very, very long time. He deserves to be there along with the rest of us.” Halford predicts that, “It won’t be as awkward as Ace and Peter [with KISS]. I don’t think it’ll be awkward at all. I think you have to let all of that go because it’s the night that matters. It’s the moment that matters — but, again, the proverbial saying, we’ll cross that bridge when we get to it.”

Priest will be busy while the Rock Hall voting is being conducted, of course. The group is slated to resume its Covid-interrupted 50 Heavy Metal Years tour on March 4th in Peoria, Ill., with North American dates through mid-April…The upcoming dates will also feature a quintet lineup with producer Andy Sneap back on guitar after Priest announced last month it planned to tour as a quartet, without him.

“That all came from me, it didn’t come from the band,” confesses Halford, who considered that since the band was founded as a four-piece it would be appropriate to return to that for a 50th anniversary celebration. “Of course, that blew up in my face, didn’t it? To have done something like a four-piece now would’ve been just not right, ridiculous, insane, crazy, off my rocker, have a cup of tea and relax. It’s kind of water under the bridge now. I think my heart was in the right place, but I’m not the first musician to have a crazy idea…”

SAXON’S NEW ALBUM “CARPE DIEM” OUT TODAY, LISTEN TO SONGS “THE PILGRIMAGE” AND “REMEMBER THE FALLEN” ›