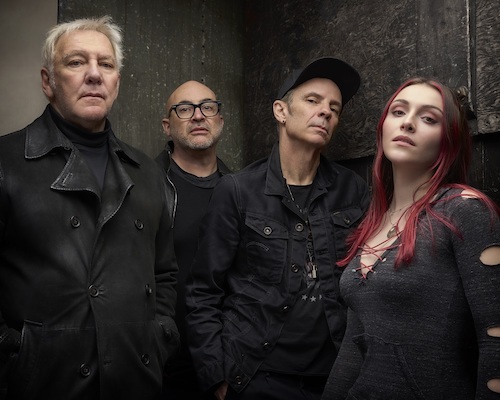 Andy Curran, having a “soft spot” for Look Inside recalls the song’s creation “I was in my studio late one night, headphones on… a few glasses of red wine deep and thought, wouldn’t it be fun to pull out my bass, blow up the tone, double it and play to a really messed up super slow drum groove. It’s got a real stoner vibe to it. That’s what happens when you mix wine and bass… Mission accomplished!”

With the rough bed track and song name sent to vocalist Maiah Wynne her initial thoughts were one of introspection “Sometimes you have to shine a light on all the ugliest pieces of yourself in order to truly change, and you have to keep slaying that dragon over and over again. It is a continuous, slow and painful process. The guitars and bass really drive the grittiness and heaviness I felt when I wrote those lyrics. It feels like an all-encompassing sludge, and that is what I absolutely love about this song.”

Envy Of None’s self-titled album is due for release on April 8th via Kscope.

Envy Of None track listing:

The album will be released on the following formats and is available to pre-order here.

Golden ticket, Envy Of None, in partnership with Epiphone & Gibson Guitars, are giving away an Alex Lifeson Axcess Standard Signature Les Paul guitar to one lucky fan who finds the “golden ticket” in the deluxe edition.

Envy Of None are:

Read more about this project, here.