RONNIE MONTROSE “10X10” TO BE RELEASED ON SEPTEMBER 29TH, ALBUM TO FEATURE DIFFERENT GUITARISTS, AND VOCALISTS, ON EVERY SONG 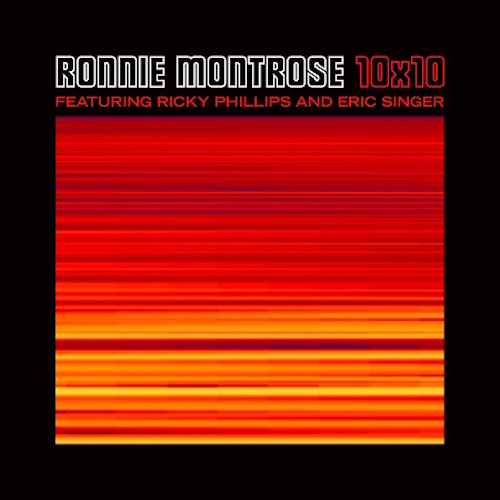 Before his untimely death in 2012, renowned American rock guitarist Ronnie Montrose began recording an ambitious passion project with bassist Ricky Phillips (Styx, Bad English) and drummer Eric Singer (KISS, Alice Cooper). The idea was to record 10 songs with 10 different singers and call the album 10X10. Sadly, Montrose was unable to see the album through during his lifetime. Instead, Phillips made it his mission to finish the songs by enlisting a small army of Ronnie’s musician friends to record the vocals and the guitar solos for each song, completing the album in recent years.

Phillips says the songs represent some of Montrose’s best work. “His songs still have the fire and angst of a young rebel, but with some added wisdom and foresight voiced in his own unique language of ‘guitar-speak.’ On 10X10, we hear Ronnie at the top of his game, from the opening crunch guitar of Heavy Traffic, all the way to the closing song, I’m Not Lying, which was Ronnie’s tip of the hat to his friend Robin Trower.”

Several artists who appear on 10X10 had recorded with Ronnie during his career, like Edgar Winter, who included the guitarist on his 1972 album, They Only Come Out At Night. Sammy Hagar got his start singing with Montrose. Between 1973-75, he recorded two influential albums – Montrose and Paper Money – with the band and toured the world.

More than 40 years later, Hagar was among the first who agreed to help finish Ronnie’s final album. “It’s valuable to have 10X10 be seen as Ronnie’s last work, rather than going and digging up some stuff from his past. This was something he truly had a vision for,” says Hagar.

A few weeks after 10X10 is released, Rhino will introduce Deluxe Editions for Montrose (1973) and Paper Money (1974). Each double-disc set includes a newly remastered version of the original album, plus a bonus disc of unreleased demos, studio recordings, and live performances. Each collection will be available on October 13 for $19.98. On the same day, vinyl ($31.98) and digital versions will be released. These double LPs include the remastered version of the original album along with a selection of bonus recordings.

Montrose and Paper Money feature some of the band’s most enduring music, like Rock Candy, Bad Motor Scooter and Space Station #5. Those two albums would help shape and influence many of the hard rock bands that followed, including Van Halen and Iron Maiden.

All 17 tracks on the Montrose bonus disc are previously unreleased, including demos for Rock Candy and Good Rockin’ Tonight, as well as the unreleased song Shoot Us Down. The remaining bonus tracks feature live performances that were recorded in April 1973 at the Record Plant in California and broadcast on radio station KSAN. Along with hits like Bad Motor Scooter and Rock The Nation, the set list also included a cover of Chuck Berry’s classic Roll Over Beethoven.

All 10 tracks on the Paper Money bonus disc are previously unreleased live tracks recorded in December 1974. Once again, the recording is of the band performing at the Record Plant for another broadcast on KSAN. Along with concert staples, the show highlighted two tracks from Paper Money: I Got The Fire and Spaceage Sacrifice.