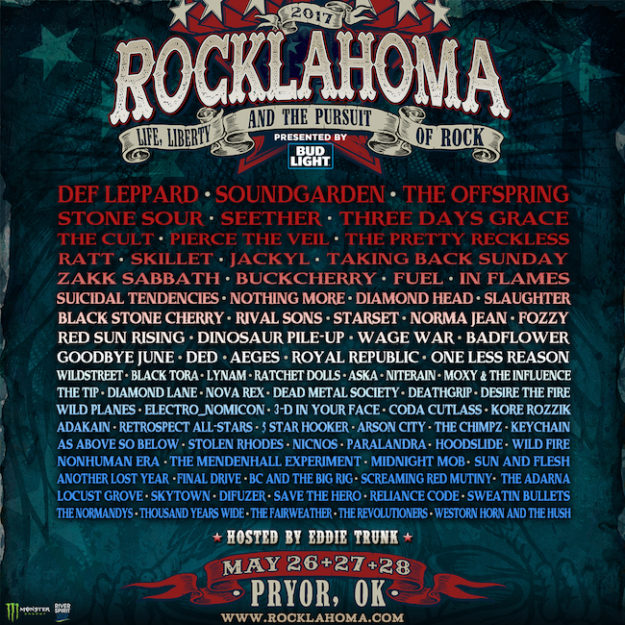 A massive music lineup has been announced for the 11th year of Rocklahoma, presented by Bud Light, May 26th, 27th & 28th, 2017 at “Catch the Fever” Festival Grounds in Pryor, Oklahoma, just outside Tulsa. Soundgarden, Def Leppard, and The Offspring lead the music lineup for America’s Biggest Memorial Day Weekend Party, which features the best current rock artists and classic bands. The three-day camping festival features music on three stages, as well as a campground stage to keep the music going all night long. With onsite camping amenities and unparalleled VIP packages, Rocklahoma lives up to its motto of “Life, Liberty & the Pursuit of Rock.” In 2016, Rocklahoma had its biggest year ever, with over 70,000 fans attending the festival’s 10th year.

“Every year we try to find that delicate balance of talent at Rocklahoma, and the lineup we’ve put together for 2017 will not disappoint,” commented Joe Litvag, executive producer of Rocklahoma. “Def Leppard has been on the wish list of our most loyal fans since the festival was created back in 2007, and to couple them, one of the most influential British rock bands of the last 30+ years, with Soundgarden, one of the most respected American rock bands of our generation, is really special for us. Add to the mix some of the hottest developing talent like Pierce The Veil, The Pretty Reckless, Nothing More, and Rival Sons, and I think we’ve accomplished the goal of achieving one of the most diverse festival lineups of the year anywhere. It’s going to be a really memorable weekend!”

Presale weekend tickets and layaway packages, as well as hotel, camping and VIP packages, are available for purchase starting Tuesday, January 10 at 10:00 AM CST at rocklahoma.com.

Those purchasing a River Spirit Casino Rocklahoma VIP option (including Reserved Weekend and Packages) will have the ultimate Rocklahoma experience! All VIPs receive upgraded parking and access to the VIP tent that includes all you can drink Bud Light, soft drinks, coffee, iced tea, water and an amazing assortment of food, served buffet style. This is the ONLY way to truly experience Rocklahoma.

The Rocklahoma public onsale is Friday, January 13th at 10:00 AM CST. Beginning at that time, ticket prices will increase, so fans are encouraged to buy during the presale. At the public onsale, prices will be as follows:

As in the past, General Admission ticket discounts will also be available for active military through Rocklahoma partner GovX at govx.com.

The campgrounds are a unique part of the Rocklahoma experience, with an endless party running around the clock for four days. General Admission Camping and VIP Camping tickets may be purchased as an add-on during online checkout at rocklahoma.com. Campgrounds open on Sunday, May 21st at Noon and will remain open until Noon on Tuesday, May 30th.

Rocklahoma is located just 45 minutes northeast of Tulsa, in Pryor, OK. The “Catch the Fever” Festival Grounds is a premier destination for a multi-day festival and includes onsite camping with access to restrooms and shower house, a general store for campers, VIP reserved seating, hospitality areas and much more.