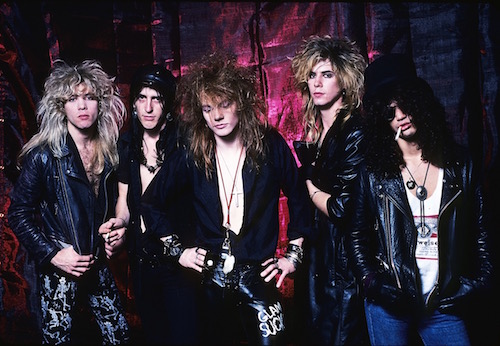 Steven Adler says, “He was able to make guys in the band that he shot really look good. He knew when to push the button and set the lights, He had that magic touch. Like Guns N’ Roses did, when the five of us were together we had that magic touch; we couldn’t do no wrong. And Mark had that same magic.”

Mark on his days with Guns N’ Roses, “I first shot Guns N’ Roses the fall of 1986, eight months prior to the release of Appetite for Destruction, they were still working on the album. The buzz was out and Hit Parader magazine wanted me to shoot them for the cover. When I first met them they were a bit guarded, they had their own photographer and the band didn’t want to shoot with anyone but him; as I was told by the publicist. The record company told them they had to shoot with me so I can get them in the magazines. I remember Axl not wanting to look in the camera. I gave them their space and shot a few rolls of film. I thought it was peculiar that they would be all glammed up and then on Axl’s pants it said ‘glam sucks.’ It was the beginning of many more memorable images to come that continues today.”

Guns N’ Roses played the Ritz, in New York City, on October 23rd, 1987. The following week, the band came by my studio for a quick shoot. They invited me to CBGB’s for their show on October 30th where they did an acoustic set along with an autograph signing. I shot a few Motley Crue shows in Florida at the end of November 1987, Guns N’ Roses were the opening band. I went to say hello to the guys before they went on and asked if they would do a few photos after the show. When I went back, Axl was in a towel with his boots on.

In the spring of ’88, I was back in LA, and heard Guns were off tour for a couple of weeks. I reached out to their publicist to see if they would be up for a shoot. We ended up shooting the Sunset Grill on Hollywood Blvd, everyone showed up except Axl – I shot individuals of the four of them and the next day I shot Axl. He drove up with his girlfriend Erin Everly, had a burger then posed for about 15 minutes. As he was leaving, he showed me his cell phone; which was huge. He was like “Look what I got Mark, wanna make a call?” it was the first time I used a cell phone.”

Proceeds from the auction of these photographs, go to WhyHunger.