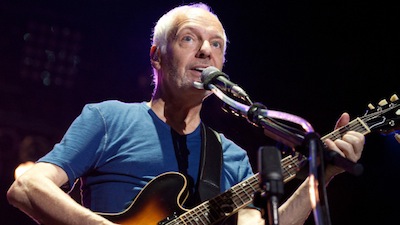 Peter Frampton was forced to take matters into his own hands at a recent concert, when two fans refused to stop taking pictures of him on stage.

And after repeatedly gesturing to the couple to refrain from taking shots and getting no response, the musician eventually grabbed the phone and launched it into the air.

Frampton, who is currently on the Guitar Circus tour supporting his new album Hummingbird In A Box, was playing at the Palladium in Carmel, Indiana when the incident occurred.

Prior to the gig, the theater announced there would be no flash photography or filming allowed. However, a couple arrived late, sat in the front row and began taking pictures and recording the performance. Despite not hearing the message, Frampton made it very clear he wasn’t happy, repeatedly gesturing at the couple to stop. They ignored the guitarist and carried on until the situation came to a head during the track Do You Feel Like We Do.

Onstage Magazine continues the story, “You could see the look of desperation and frustration on Frampton’s face and at the end of the song, he walked over with a huge smile on his face, bent down and said, ‘Hey, can I see that? Can I see the photos you’ve been taking?’ The guy handed him the phone and Frampton stood up, spun, and flung it to the rafters. The phone went flying to the back of the stage and the crowd erupted in cheers.”

After the concert, Frampton took to Facebook to post some first-hand accounts of the incident, saying: “Here are a couple of reports from the show and thanks again. We had a great show. Love the theater and the sound was great. We’ll be back.”

Frampton released Hummingbird In A Box last month – a seven-track project which came from a collaboration with the Cincinnati Ballet, while the English musician also released a stream of album track Friendly Fire last week.

‹ GUITAR LEGEND ACE FREHLEY TO SIT IN WITH THE ROOTS ON THE TONIGHT SHOW STARRING JIMMY FALLON ON TUESDAY, AUGUST 12TH