Ritchie Blackmore has announced he will tour with Rainbow in 2017, with four dates planned for the U.K (see the dates below).

The tour follows on the guitarist’s sold-out shows in Germany and Birmingham, England, earlier this year. Those were Blackmore’s first rock performances since 1997, when he launched his folk-rock ensemble Blackmore’s Night.

Though the band’s previous shows featured a selection of songs by Rainbow and Deep Purple, Blackmore said recently that the Rainbow songs were better received.

“I noticed when they clapped, they weren’t clapping so hard for Deep Purple,” Blackmore told Radio Veronica last July. “They said, ‘We hear that every year’—’cause Purple goes around [on tour]. So the next time, if we go out, I would probably do 95 percent Rainbow songs. That’s what they seem to want to hear.”

In the same interview, Blackmore admitted that his vision was deteriorating and hinted at other age-related issues that were slowing him down.

“Optically, I’m deteriorating very fast, as we all are,” he said. “All my friends are passing away. Some of my enemies are passing away too. But we try and keep up with it. What I do is I limit how many times a week we play…And normally, our agent would tell us, ‘To make money, you have to be playing five days a week.’ And I refuse to do that. I used to, with Deep Purple…and it gets very tiring…”

Watch a performance of Man on the Silver Mountain from the band’s Memories in Rock—Live in Germany, which was released on November 18th. A deluxe version (DVD, Blu-ray and 2CD in a 48-page hardback photobook), along with a 3LP version (180-gram vinyl), was released as an import on December 2nd.

[Dana’s note: Thanks to T, as always, for passing this along] 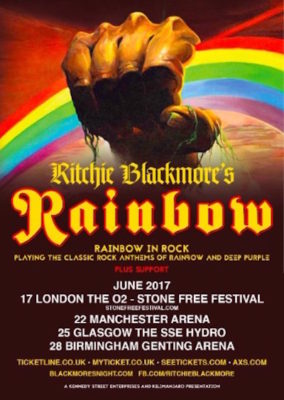