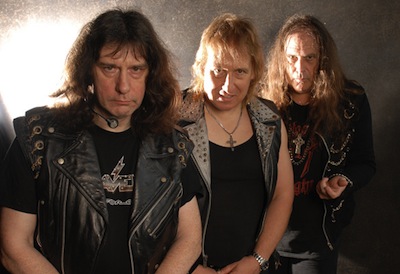 Greg Prato for Songfacts spoke with Raven frontman and bassist John Gallagher. Portions of the interview below.

Songfacts: Let’s discuss the new documentary, Rock Until You Drop. How did it come about?

John Gallagher: The genesis came a few years ago when there was a company in New York that wanted to put out a “Best Of” Raven, and it kind of fell apart – they flaked out on us. I put all this stuff together and we said, “You know, let’s just do a box set with all the stuff everyone’s never heard before,” and we put out an album called Raw Tracks, which was all the demos that never came out. The idea was kicked around back then, and I said, “Wow, it would be great if we could do a DVD along the lines of this.”

We’d done a DVD back in the early ’90s called Electro Shock Therapy, which only came out in Europe. It was basically filmed when we were on tour – it was live stuff and us clowning around. It was very entertaining. It was a lot of fun. We just figured it would be good to “long form” this at some time, because my brother had been collecting and archiving for a few years. Then we were talking to our record company, and they were like, “Let’s do it.”

So my poor brother (guitarist Mark Gallagher) locked himself in a room for the best part of a year, turned his eyes into road maps, and put this together. It’s pretty much the history of the band from when we started all the way through. It’s not really, “Oh, let’s just sit down and watch this,” because it came in too long. It’s three hours, plus the actual so-called documentary part, so it’s really for the diehard fan. We didn’t want to compromise this into a fluffy little one hour thing. Very little is left on the cutting room floor. It’s all in.

Songfacts: People like Lars Ulrich from Metallica and Chuck Billy from Testament have some nice things to say about Raven in the documentary. How did that make you feel hearing your peers saying such things?

John: It’s very gratifying. Lars is very cool, and was excited about doing it. He talked for a long time; he was very complimentary and had a lot of good stuff to say. I think he comes off really well in this, because there are other ones I’ve seen him in where he’s playing “Mr. Rock Star.” But he’s very down to earth, very honest, and very cool. Chuck did some great stuff. Dee Snider came out of the woodwork and did a great little thing for us, totally unprompted. It was wonderful. I’ve run into Chris Jericho, who I’ve done an interview with. He’s a rock guy, actually, for years. He’s playing with his band, Fozzy, and he just said, “Hey, come to the show.” He was playing a festival and we went there. Really good guy. He’s been a fan since day one, so his little part was really cool, too.

Somehow I got hold of Steven Thompson [the co-producer of Rock Until You Drop] at the start of this record, and he did a wonderful piece about the thing with the first record. Really fun. The guy was so funny. Hilarious. And of course, we got Michael Wagner. Me and the wife went down in Nashville for a couple of days and hung out. We connected with Michael; we did a record 10, 12 years ago with him down there. And that was awesome, too. Got a lot of good stuff.

Songfacts: Do you agree that Raven helped create thrash metal?

John: Well, we’re definitely to blame [laughing] partially, if nothing else. I mean, it’s one of these things where it’s transitional music: one band will maybe push it in one direction and then somebody else – like a relay – takes it and moves it further forward. We were one of the first bands to play it pretty fast and do a lot of that stuff.

And where did we get the baton from? We got it from Montrose, Deep Purple and Judas Priest, who either to a different or lesser extent were doing something similar. We used elements and refined them in a slightly different direction, put a bit more energy into it. Then the bands that came after us removed some of the melodic content, put a little bit more discord into it, and put their own energy into it.

I hear a lot of people saying it’s cool to hear that you’ve influenced bands. We played this one show in Germany in ’83, and basically everyone in there had just started a band. We’d hear about Kreator, Rage, Coroner, Doro Pesch – a whole bunch of bands. This one little show, it was really amazing to hear afterwards, “You guys are the reason we’re in this.

Songfacts: When did you first hear Metallica and what were your first impressions of them?

John: That’s a good one, as well. We’d already done a couple of shows, and in Halloween ’82, Jonny Z [head of Megaforce Records] flew us to America and said, “I want you to come back and do a tour in ’83. We’ve got this band for you. They’re the biggest band in San Francisco, and they’re going to open for you.”

“Who? Never heard of them.”

So we got the tape of No Life ’til Leather [Metallica’s demo]. Put it on and it sounded like Motörhead at the wrong speed, like at 78. My hair blows back off my head like a hairdryer. I’m like, “Oh, these guys are impressive. This’ll be great. Yeah, fine, bring them on.” That was their first tour for us. Real young, real crazy. I mean, apart from Cliff [Burton]. Cliff was like an old soul on young shoulders. He was definitely their musical heart, and kept them somewhat grounded. But that’s how that all came about.

It was insane. Played all the way across America. With the bands and crew, it was like 17 people in a 6 person Winnebago in the middle of one of the hottest summers ever. We’re straight out of the frozen north of England and just boiling alive.

The shows were great, and we played this music that people normally would never have heard.

Songfacts: And then there’s that classic show at Roseland. I think it was in the summer of ’84, when Raven headlined over both Anthrax and Metallica.

John: That’s right. That was the show of three bands: Anthrax opened, Metallica played in the middle.

Songfacts: Anything stick out about that specific show?

John: Yeah. I remember it was really weird because I was married at the time, my brother was married, and our drummer had a very serious relationship. And all three of the women came over and we were all breaking up at the same time. So it was a lot of tension backstage with that right off the top. “Hey, honey, I’m divorcing you” – this kind of thing.

We were all set to go on and I remember Scott [Ian] from Anthrax was backstage with us, and we just got the word that some guy snuck onstage and picked up Mark’s prized Fender Telecaster and ran off with it. I lost my nut, the famous straw. I grabbed the door and I pulled the door off its hinges. I just remember Scott looking at me with absolute horror: “Oh, shit, I’ve never seen anybody do that before.” I was really mad, really pissed off.

Got the guitar back and we went on stage and tore it up like our lives depended on it. Which they probably did. [Laughs] There are photos of that on the Live at the Inferno album. I think the back cover is the end of that show.

Songfacts: You mentioned Cliff Burton before, does anything stick out as far as memories of hanging out with him on the road or anything like that?

John: Cliff was very cool. It’s funny, I hear people trying to imitate his bass solo [(Anesthesia) Pulling Teeth] and it’s playing beyond belief. He had a good knowledge of theory, he was a really good player and good guy. We’d sit backstage and trade riffs, showing each other different finger techniques. There’s this Allan Holdsworth song that had this weird chord and I figured it out on bass, and then he was trying to figure out what the name of the chord would be.

He had an interesting customized Rickenbacker bass that he played in the early days. I don’t know if you remember, Rickenbacker has this weird-looking bridge. Well, he tapped some parts out and snuck in a humbucking guitar pick-up right in the bridge, which was his little secret weapon.

And like me, he played with a lot of effects. A wall of distortion and what have you. I remember we played in Texas, and the opening band had a good bass player there, too. The poor audience had to suffer through three bass solos that night! Not the normal kind of bass solos, that’s for sure. [Laughing]

Read the entire interview at Songfacts. 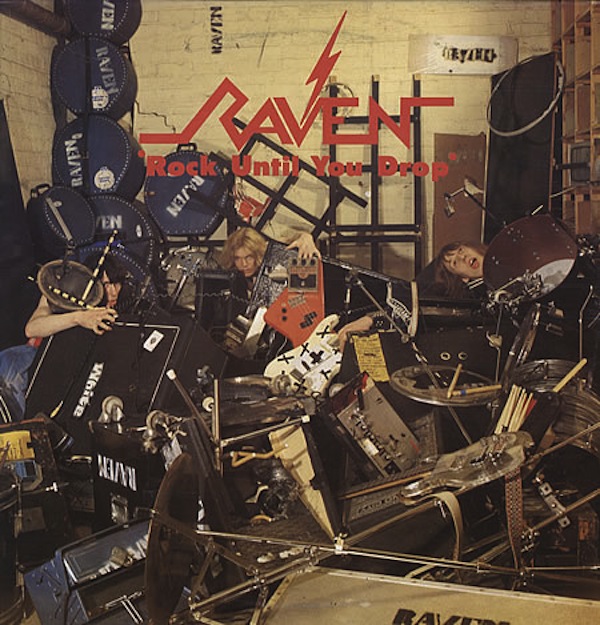 AIRBOURNE RELEASE THEIR VIDEO FOR “BACK IN THE GAME,” WATCH IT HERE ›