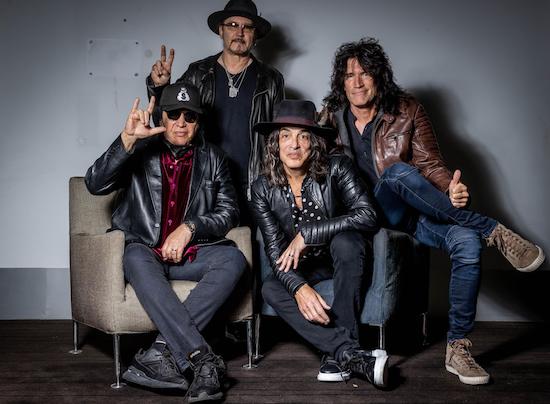 Paul Stanley says KISS’ legacy will live on beyond their last tour date — if that day ever comes, that is.

Page Six exclusively caught up with the 70-year-old frontman, who is in the midst of the band’s End of the Road World Tour, to discuss the looming end of the band’s nearly 50-year reign.

“At this point, it really comes down to what’s possible at certain ages,” Stanley told us.

“If we were wearing sneakers and T-shirts and jeans, we could do this into our 90s. But we’re carrying around 30, 40, 50 pounds of gear on stage, and making it look easy. And at some point, you realize that you can’t do that indefinitely.”

KISS originally consisted of Stanley, Gene Simmons, Ace Frehley and Peter Criss. However, the latter two were part of the band on and off throughout the years before finally quitting in the early 2000s.

Since January 2019, Stanley and Simmons have been on tour alongside Eric Thayer and Tommy Singer — and they haven’t shown any signs of stopping.

“As far as a tour going on forever, we have to acknowledge that two years were lost with COVID,” he said. “So from the time the tour was announced, we lost two years.”

As for the future of the rock group without its original members, Stanley sees the band “continuing” to be part of American culture even after they’re gone.

“I see KISS continuing — in what form that manifests itself is really something that will develop over time. I don’t know exactly what that means. But quite honestly, we couldn’t kill KISS if we wanted to. It’s a part of Americana.”

He continued, “It’s part of world consciousness, and even if we stop, the band continues, in essence. But should it diversify and spread in terms of what KISS is? Sure, the idea, the limitations of other bands, that’s their problem. We’re not those bands.”

While neither Simmons nor Stanley has revealed the last stop on their tour — which fans have hilariously dubbed the “never-ending world tour” — the former told us last month that they know when things will come to an end.

“I know where and when, but I’m not [revealing yet],” Simmons told us. “I do know the last day and date. But you don’t want to find out what you’re getting for Christmas as a present in July, right?”

“We love the fans, and we don’t want to stay on stage too long, but we’re having the time of our lives,” he continued.