NICK SIMMONS WRITES “MY DAD, [KISS BASSIST] GENE SIMMONS, IS FULL OF SHIT AND SO ARE YOU” 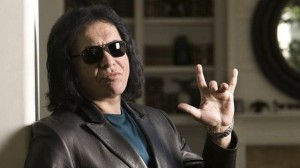 Gene Simmons’ son, Nick Simmons, wrote an article about his father for Vice magazine. Excerpts from the feature appear below.

Patton Oswalt has a routine about the first time he ever realized one of his parents was full of shit. “When you’re growing up, up to a certain point, no matter what an adult says it’s just gospel,” he says, “and then there’s that first thing where you go, ‘I think that’s fuckin’ bullshit.'” For most of us, I imagine, that moment happens early.

For me, it hit well into my teens. And the realization was a lot harder to swallow.

…This epiphany came to me in high school, when I started learning about drugs. My father prides himself (read: brags about it to anyone who asks) on never smoking, drinking, or getting high in his life—save for one incident when some “special” brownies were mistaken for… well, normal brownies.

He is still, to this day, profoundly anti-drug. Perhaps due to stressful encounters with drug addicts in the rock n’ roll scene of the 70s and 80s, he resents drug addicts as people. In his experience, they made his life, and his work, more difficult than they should have been.

…he does believe in harsh drug laws, and he has no sympathy for drug addicts. From talking at length with him about it, I know now that this often-misunderstood resentment is not a reaction to real, tragic, medical victims of drug addiction. He resents more the people they were when they made that first choice: the choice to do that first hit, plunge the first needle, to take the first snort. He cannot empathize with that first decision to gamble with what is, in his immigrant’s eyes, a life in the land of opportunity. He believes the responsibility lies with the drug addict for trying it first, knowing everything we know in this age of information. To take that risk is to forfeit his sympathies.

…It was during one of these situations that I realized that I disagreed with my father…I knew people who smoked pot. Most people I knew drank. But I could not bring myself to conclude, as he did, that any negative health impacts of those choices were deserved. Life is risk, after all. I realized that I don’t believe marijuana and alcohol should be treated the same as heroin and cigarettes.

…Whether you agree or disagree with my opinion on drug use is irrelevant—the larger point is that he taught me a more valuable lesson, in disagreement, than he had ever taught me when we agreed: that no belief is sacrosanct. He taught me, accidentally, that our heroes can be wrong…Once I caught sight of this chink in the armor, the rest fell away easily. He was no longer Superman to me.

Read the whole piece at Vice.