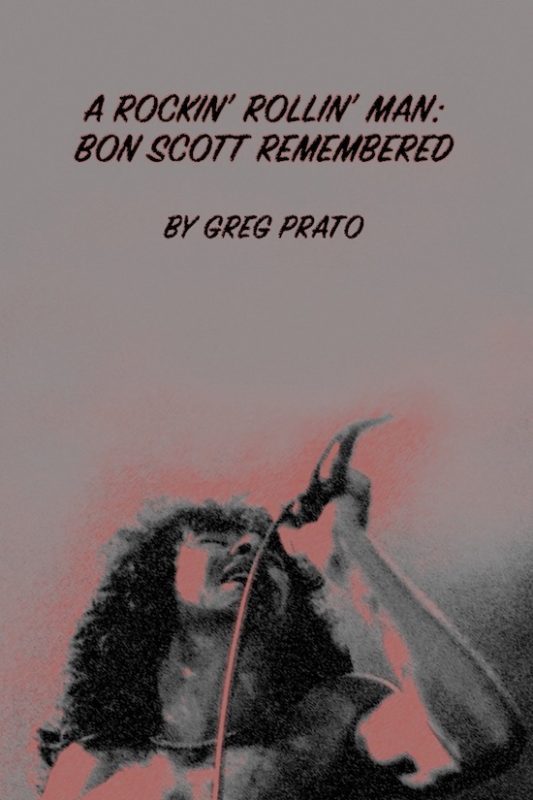 There have been few rock singers as beloved as the late/great Bon Scott of AC/DC. After all, it was his unmistakable vocals and street-wise/sexually-charged lyrics that were a major part of such all-time classic rock anthems as Highway to Hell, Sin City, Whole Lotta Rosie, Dirty Deeds Done Dirt Cheap, and TNT. And it was the “Bon era” that set the stage for AC/DC to go on to become one of rock’s most universally popular and enduring bands.

But few rockers partied as hard as Bon—sadly resulting in his death at the age of 33 on February 19th, 1980, just before AC/DC scored their worldwide breakthrough, with the mega-selling Back in Black. To mark 40 years since Bon’s tragic passing, the just-released A Rockin’ Rollin’ Man: Bon Scott Remembered has been assembled by journalist/author Greg Prato—comprised entirely of all-new interviews with renowned rockers, discussing what made Bon so special and unforgettable.

Priced at $12.99 for the paperback and $7.99 for the Kindle version, the book features vintage photos and all-new interviews with the likes of Tony Platt (engineer of Highway to Hell and Back in Black, Simon Wright (AC/DC drummer: 1983-1989), KK Downing (ex-Judas Priest guitarist), Scott Gorham (Thin Lizzy guitarist), Bun E. Carlos (ex-Cheap Trick drummer), Michael Monroe (Hanoi Rocks singer), and Phil Anselmo (Pantera singer), among many others.

Read an excerpt from the book at Songfacts.

‹ SLIPKNOT ANNOUNCE KNOTFEST ROADSHOW 2020 WITH SPECIAL GUESTS: A DAY TO REMEMBER AND UNDEROATH