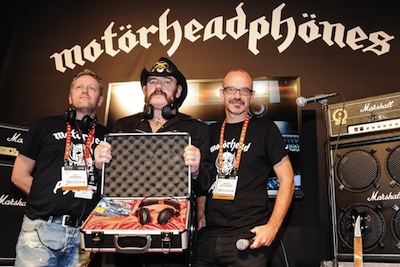 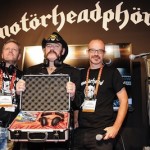 “People say we’ve never sold out,” joked Lemmy during the launch. “No one ever approached us.”

The headphones were specifically designed to bring out midrange sounds unlike other high-end headphones like Beats, which place an emphasis on bass. Brand manager Andres Nicklassen – who initially approached Motorhead about the headphones with CEO Ulf Sandberg – said that too much bass takes the soul out of rock. Or, as Lemmy put it, “It’s like you’re listening through a towel.”

Motorheadphones are made of all metal and will be available in three different over-ear designs and six in-ear models, with prices for the latter ranging between $49.99 and $59.99, and $99.99 to $129.99 for the former. Most of the headphones will be smart-phone ready, with two models coming with a recently developed microphone remote control called the Controlizer.

Motorheadphones have been available in Europe since last fall, and they’ll start shipping in the U.S. in April.