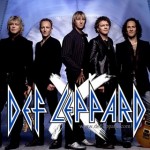 Def Leppard are re-recording as much of their back catalogue as possible after failing to reach an agreement with Universal over digital releases. And last month the band cut five acoustic songs performed during their Rock Of Ages Tour for a medley released to iTunes.

“We’re trying to wrestle back our career and ownership of these songs,” said Elliott in an interview in the latest issue of Classic Rock. “They [Universal] own the originals, we’re at loggerheads with them over the digital rights. And as long as they’re playing silly buggers we’ll just keep recording them again.”

The singer continued, “Until we can come to some kind of humane conclusion to this ridiculous stand-off, we’re going to say, ‘Fuck you!’ We were offered a great deal two years ago and shook hands on it. And then some other twat at the label put a stop to it. It’s our life and our music and we’re not going to let them exploit us to the extent that they’re trying to.”

Elliott said Universal wouldn’t be the major player it is today without the help of Leppard’s multi-million-selling releases.

“Between us and Bon Jovi we fucking built that company,” he insisted. “We built their penthouse sushi bar, wherever it may be, and they just treated us like shit. We can either roll over like little dandelions or we can stand up and punch them in the bollocks. And that’s exactly what we’re doing.”

Read the full interview with Joe Elliott in the new issue of Classic Rock, on sale now.