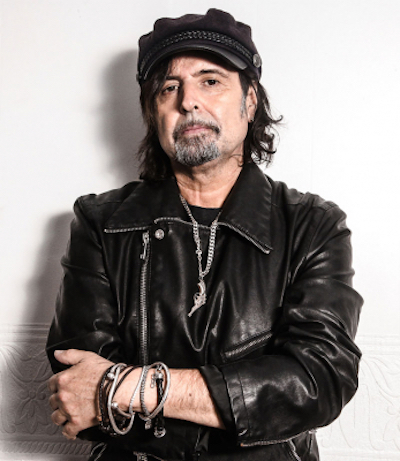 Greg Prato of Songfacts spoke with Moorhead guitarist Phil Campbell. Portions of the interview appear below.

Songfacts: How does the songwriting in Phil Campbell and the Bastard Sons [the band Campbell has formed with with three of his sons] compare to Motorhead?

Campbell: It’s all a collaboration. We have our own recording studio and rehearsal facility. My son, Todd, his actual name is Todd Rundgren Campbell – he hates me for it! I named him after Todd Rundgren, my hero, and he’s now in his early 30s.

So yeah, we have our own recording studio a few miles down the road from our houses – we all live kind of locally. We just go down and blast it out. Todd actually had a lot to do with the writing on this. It’s the same thing – it’s just a band collaboration. Like with Motorhead, as well – we just used to write for the three of us. We didn’t write for record companies, we didn’t write for fans, we wanted it to be pure…

…It’s a good collaboration with the band now. Neil Starr has been amazing on the vocals and the melodies. We’ve been getting some amazing reviews for this EP. But the whole five of us, we all contributed. If somebody doesn’t like something, they put their hand up and then we try to work it out. Which is good – it’s fun.

Songfacts: Was [Motorhead bassist/singer] Lemmy [Kilmister] underrated as a lyricist?

Phil: Definitely, yeah. He never got the credit he deserved…

…He knew he was, but he didn’t care as long as some people understood what he was singing about. Lemmy just cared about his band, his music, and the fans. He wanted to look after the fans. We all wrote the music – it was the band’s music – and Lem wrote all the lyrics. I was responsible for most of the riffs, basically. But it’s all a melting pot, really. Everything got split equally.

I think he would have liked to have been accepted more for his lyrics, but he didn’t lose any sleep over it. As long as Lem got his point across.

Songfacts: What was the inspiration behind the song Orgasmatron?

Phil: I remember Lem had the lyrics done – he’d had them done for a few months in Los Angeles. I don’t know who came up with the riff for that, actually. It was probably Lem came up with that one, and then I probably added some stuff. But Lem had a general idea for that one. That was his beast, or baby. The three verses from hell…

Songfacts: I’ve always wondered if the song title was inspired by the Woody Allen movie, Sleeper, as there was a device called an “orgasmatron” in it.