Motley Crue will hold a special event in Los Angeles on January 28th under the banner RIP: All Bad Things Must Come To An End. The band is expected to announce the first details of its farewell tour, which will likely last for a couple of years, reports blabbermouth.net.

Motley Crue bassist Nikki Sixx was asked in an October 2013 interview with RollingStone.com about the band’s eventual farewell tour, which singer Vince Neil said could begin as early as May 2014.

“We haven’t decided when that is, we’re talking about that,” Sixx said. “It’ll happen, but we don’t know when it will happen. The most important thing about a farewell tour is that the band doesn’t lie to the fans, and the band doesn’t tour and then come back years later. That’s what’s important for us, planning what’s the right time to go out. We have a great fan base, we have original fans all the way down to teenagers, and we really feel grateful to that and we continue to reinvent ourselves over the years. People always tried to make us an unimportant part of rock history and that doesn’t really affect us because it’s always been that way. Critics have always snubbed us. The thing about Motley Crue is we are a people’s band, we don’t kiss ass to the industry. We believe artists should be in control of their own destiny and that destiny also includes when it should be done so that their fans can forever be proud. It’s not one or two band members up there dragging the band name around. It’s a band for a reason, it works for a reason. We’re really proud of that. I think that’s why, when the day does come, we want to be proud of our band and what we’ve achieved.”

He continued: “Someone said to me the other day, ‘Won’t you be sad?’ I go, ‘No, I’d be sad if we were playing half-full theaters and only two band members were in the band.’ That would be sad. Sad is not taking your final bow in Los Angeles all together as four brothers. I talked to a friend the other day and they were talking about a friend of theirs who passed away. And after the funeral, they had this huge party and everybody was celebrating, drinking and telling stories about this guy and how fun he was and how much joy he gave everybody in life. That’s how I feel about Motley Crue. When that day comes, that’s what I want: one big fucking huge party to celebrate what we’ve done, all the good, all the bad, all the in-between. There it is, one big party, one final bow. It’s gonna be fucking rad, but we’re not there yet. Right now, we got three shows left in Vegas and then we’re gonna start looking forward to when we tour next.”

Asked if there there could be multiple tours, or if the next one will be the finale, Sixx said: “We don’t know right now. We said as brothers and a band, that’s something we plan on doing sometime in the future, but we’re not there yet, so we don’t have any idea when. We’re not sitting down right now planning on that.”

In an interview with Billboard.com, Neil said about Motley Crue’s upcoming farewell tour, “I think we’ll start the tour around May — I’m just kind of guessing on that, but in the spring of ’14 — and we’ll do one more time around the world and kinda call it quits. It’s just that time. We’re going out on top. We don’t want to be some band that people are like, ‘Oh, they’re playing a club now,’ that kind of band. We still sell out arenas, have stadium stuff and things like that, so let’s go out when it’s a big deal.”

Vince also insisted that Motley Crue’s retirement will be for “real” and that they won’t hold multiple farewell tours like certain other acts. 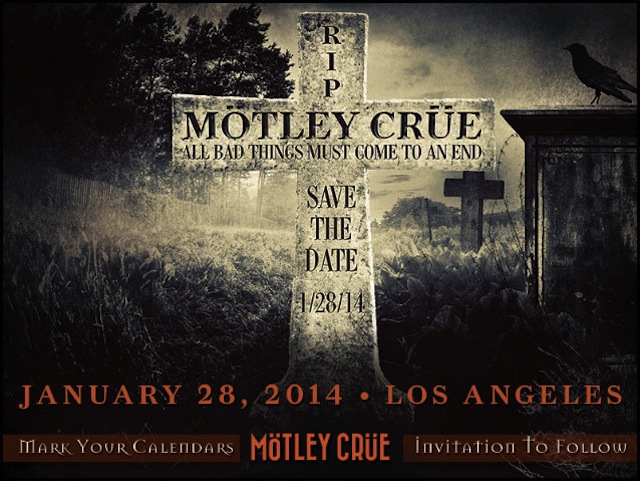