The Monsters Of Rock Cruise, the world’s largest and longest running Heavy Metal and Hard Rock cruise, has only 34-cabins available before selling out its fourth consecutive year. Tickets for the remaining 34-cabins aboard this musical playground will be sold on a first-come, first-served basis, starting at $1,099 per person (double occupancy) and are available at MonstersOfRockCruise.com.

This year’s cruise itinerary is kicked off by a two-night pre-party event at Miami’s Magic City Casino on April 15th, featuring performances by Queensryche and Lillian Axe, and April 17th, featuring performances by Stryper, Tyketto, Gabbie Rae and a special surprise guest artist. The fun continues the moment fans board the ship, meeting new friends poolside during the kickoff Sailaway Concert featuring cruise alumni, Tesla. This will set the tone for the next four days of events, including: Artist Meet & Greets, all-day stops at the private Monster Beach at Poseidon’s Grotto and the cosmopolitan resort mecca of Nassau, Bahamas, the Hot Tub Time Machine 80s Prom, So You Think You Can Shred fan competition, Fantasy Night Masquerade, Rock Anthems Fan Jam hosted by Izzy Presley, Cooking With Rock Stars, plus more events to be announced.

In addition, Eddie Trunk, host of VH1’s That Metal Show and The Trunk Nation on Sirius XM, is returning this year as Master of Ceremony. Eddie will be assisted by an all-star lineup of personalities including Luc Carl from XM’s “Hair Nation,” Nikki Blakk from 107.7 FM’s “The Bone,” Keith Roth, host on Sirius XM’s “Hair Nation”/”Boneyard,” Don Jamieson, comedian, co-host of VH1’s That Metal Show; Craig Gass, comedian/actor from Howard Stern’s channel on Sirius XM and DJ Will, music supervisor of VH1’s That Metal Show, In addition, this year’s cruise will feature a “Monster” version of the world famous Cathouse nightclub, complete with original proprietors Taime Downe of Faster Pussycat and Riki Rachtman of MTV’s Headbangers Ball.

Says Larry Morand of On The Blue, “The Monsters of Rock Cruise has always been about fan and artist interaction and we have more bands and events this year than ever before. Fans don’t just watch the artists perform, they make music with the artists. If you’re looking for all things Hard Rock and Heavy Metal, this is the cruise for you.”

Visit MonstersOfRockCruise.com, or connect on Facebook and Twitter to be the first to know about upcoming announcements. 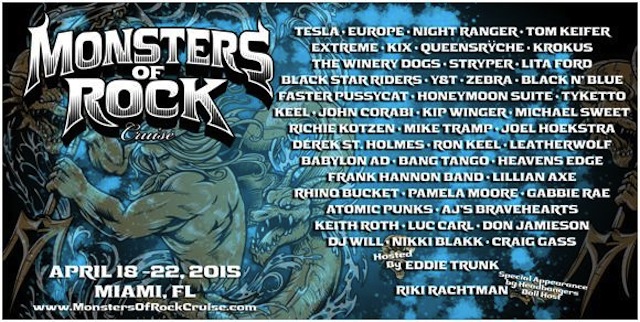