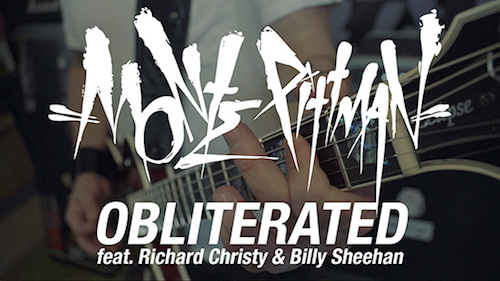 Having released his new album, Inverted Grasp of Balance, last year via Metal Blade Records, Monte Pittman is now launching a performance video for the album track Obliterated, featuring drummer Richard Christy and bassist Billy Sheehan (both of whom played on the album), watch it below.

There are great guitarists, great vocalists and great songwriters, but Monte Pittman is one of the elite few who can truly lay claim to all three titles. With his fourth full-length, Inverted Grasp of Balance, he has once again raised the stakes, delivering a riveting collection of full force metal that showcases his continuing evolution, undoubtedly expanding his devout – and ravenous – fan base. The record also features powerhouse drummer Richard Christy of Charred Walls Of The Damned/Iced Earth/Death fame and virtuoso bassist Billy Sheehan, famous for his work with a plethora of talented artists – including David Lee Roth, Mr. Big and, more recently, Winery Dogs. The skill of all concerned explodes from the speakers