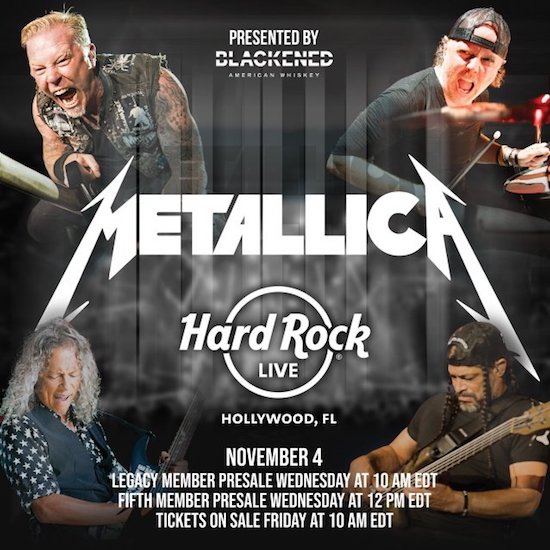 Tickets for the 7,000-seat-theater show go on sale Friday, July 30 at 10 a.m. EDT, but members of the band’s fan club (also known as Fifth Members) can get theirs early with a special presale starting Wednesday, July 28th at 10 a.m. EDT.

Says Metallica, “We’re excited to add one more night to the tour calendar this fall. It feels so great to be making plans to hit the road and we can’t wait to see all of you out there. Keep watching this space… we have a few more shows in the works!!!”

Earlier in the month, the band announced details of a massive 40th-birthday celebration by inviting the worldwide Metallica family to join them in their hometown of San Francisco for two unique live shows featuring two different setlists on December 17th and 19th at the Chase Center. Tickets for these shows will be available only to registered members of Metallica’s Fifth Member fan club.

The 40th-anniversary shows see the group return to Chase Center for the first time since the September 2019 S&M² concerts that also served as the venue’s grand opening. It was impossible not to notice that fans from more than 60 countries that traveled to the City by the Bay and completely took over San Francisco for S&M² weekend. That outpouring of positive vibes from around the world inspired Metallica to invite those Fifth Members back — and this time, in addition to the two shows at Chase Center, Metallica will be curating other live music and comedy events, Blackened Whiskey tastings, and so much more all around the city during the long four-day weekend of celebrations starting on December 16th.