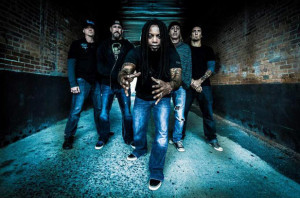 October is National Bullying Awareness Prevention month and to help raise awareness for this epidemic, Le Projet, the band featuring members of Candlebox, Sevendust and The Infinite Staircase, has launched a multi-tiered anti-bullying initiative to support the Brandon Bitner Memorial Scholarship.

Brandon Bitner committed suicide at the age of 14 after being bullied for four years and was an avid music lover.

As part of the campaign, Le Projet and Candlebox lead singer Kevin Martin has filmed a personal PSA about his own experience with bullying and explains why he wrote Le Projet’s ultimate anti- bullying song “Little Sh#ts”.

The band has also partnered with Event Hustler to develop T-shirts with the hash tag #WHATYOUSAY?, which is the chorus to Little Sh#ts reminding everyone that what they say has an impact on others, to support the scholarship fund. Portions of every sale will be donated directly to the Brandon Bitner Memorial Scholarship.

According to Martin, he felt compelled to write “Little Sh#ts” after learning of another tragic suicide like Bitner’s.

“I was inspired by a story I had read about a young girl who committed suicide because she had been emotionally bullied via social networking sites and her cell phone by several kids in her school. I remember feeling such sadness not only for her family but for every kid that I began to read about that was dealing with the same thing,” said Martin. “My first thought was ‘how can people be so cruel to one another?’ My second thought was ‘You have to write a song about this!’ I tried to put a face to these bullies but all I could give them was a name. ‘Little Sh#ts!’I think it fits.”

In addition to Martin, Le Projet comprises Adam Kury and Brian Quinn from Candlebox, Morgan Rose from Sevendust and Lenny Cerzosie from The Infinite Staircase. To learn more about Le Projet visit, leprojetband.com.

10/5: BACK FROM CA, LIVE TONIGHT ON SIRIUSXM WITH TODD LATORRE OF QUEENSRYCHE ›