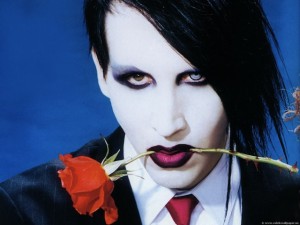 Marilyn Manson shared his wisdom about staying authentic as an artist with the ad and tech elite at Cannes Lions, and concluded, “America needs someone like me to make it not suck as much as it could.”

The singer, speaking at the Grey Music Seminar with Grey Group’s Tor Myhren, described how he has survived a lengthy career as one of the most controversial and polarizing artists, explaining it is because he has remained true to himself, “It’s difficult because you don’t want to become a caricature of yourself, and you don’t want to be a cliche … sometimes I wonder if I have outgrown my spotlight.”

He continued, “You have to question these things. I still get excited performing live still, but when you see the immediate reaction from a crowd, its like being a theater performer, its something you can’t get from being a writer or being an ad man … its almost ritualistic.” But he added, “I don’t like being a celebrity.”

In an interview where he shared a series of seemingly random sardonic stories, jokes and amusing anecdotes, Manson, dressed head to toe in black and wearing glasses and minimal make-up, said, “My father told me when I was very young, after he taught me how to be a sniper, because he was in Vietnam … My dad said, ‘Son I will give you three pieces of advice … if ever you are with a woman, squirt lemon juice on her, if she screams, don’t have sex with her, she has a disease. Second he said, ‘Son when you get a job, on day one fire someone so everyone fears you.”

Clarifying his comments about being an artist, he added, “I think that people have to believe in you and its easy to fake it, its easy to create things that are fake. My name is two fake names … Nowadays kids are more cynical because they have more information … you can’t try to sell something that is fake. Having an avatar or having a persona online isn’t having a personality either, when everybody could be famous, to me it is not a challenge – it makes it easier, it makes the best rise to the top. Anybody can make music, and be famous.”

He talked about the effect of the 1999 Columbine massacre on his career after he was initially blamed when it was falsely reported that the killers were affected by his music, “When Columbine happened, it really shut down my career entirely, the casinos and the establishments refused to book my shows, it was almost unprecedented, not only did I not do anything, but they were not fans of mine, I sat and watched it live on TV and they said initially they [the shooters] were wearing Manson make-up and t-shirts, then we found out later that they weren’t, but once the wheels started spinning … I put cease and desists on all press and I didn’t do interviews, because I thought it would give them exactly what they want.”

Manson described being interviewed for Michael Moore’s Bowling for Columbine, and added, “I started speaking about how there is a whole campaign of fear that really controls the greater part of America, and that’s why I do a shout out to France, because I look at America in the same way that an outsider would. A lot of people ask me if I would ever become an expatriate, and I considered the idea, but I think America needs someone like me to make it not suck as much as it could. If you think my music made them [the shooters] do something, which it didn’t, they were not fans – what do you think I would do?”

Of the current nature of fame he added, “It has become increasingly more difficult to maintain what I call ‘not emptying a bucket of mystery’, there are a lot of people who know a lot about your life.”

“Sometimes you end up becoming exactly what you are fighting against. If you are against pop culture, you become part of pop culture, when I make music I am my worst critic. I don’t like to read reviews unless they are good, I don’t drive myself for accolades … people have an opinion on the internet, but they are all hiding behind the cloak of the internet.”