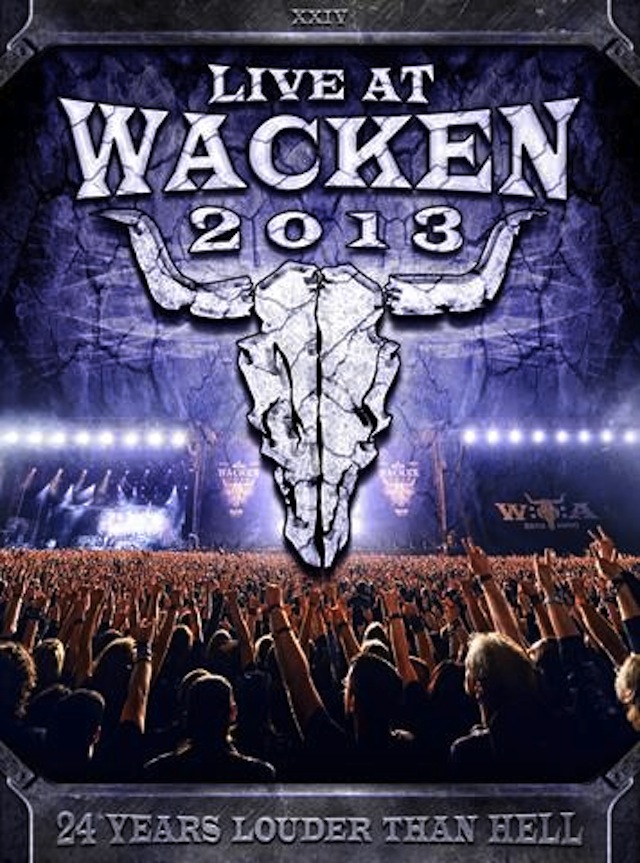 Wild and hot-that was the Wacken Open Air 2013. The 24th Wacken Open Air included over 120 bands on seven stages, 75.000 fans and most of all sun, sun and more sun. Metalheads from all over the world celebrated the most legendary party of them all and turned the little village of Wacken in Northern Germany into the place to be for any self-respecting Metalhead.

The 24th Wacken Open Air once more proved to be unique, with a special vibe which has to be experienced to understand. Live at Wacken 2013, brings this atmosphere right home on DVD, Bu and CD! The hits, the legends, the fans – and many, many memorable shows.

The 3-DVD-set and also the 3-Bluray-set offer plenty of music with 43 bands and 106 songs. The audio version on 2 CDs features 32 highlights. Live at Wacken 2013 is available now on DVD, CD, BluRay Amaray and as digital download.

What‘s even better, there are some gems hidden in some of these: One Golden Ticket for a “Lifetime Membership for the W:O:A“ giving the lucky winner the opportunity to enjoy the festival every year till eternity without buying a ticket. Also randomly included are ten Silver VIP Tickets that include a tour through the Artist Village on the festival grounds. A dream come true for any Metalhead…

Live at Wacken 2013 even serves a good cause that keeps heavy music alive: All bands and labels have donated their royalties to the Wacken Foundation, a non-profit organization in support of the Hard Rock and Heavy Metal scene. UDR Records will also be making a donation of 1 Euro for each and every DVD & CD sold, with everyone involved, from manufacturing to marketing, supporting the Foundation.

You will see Rock icon Alice Cooper, who knows better than most how to put on a show. His Wacken appearance is no exception, with three guitarists, lots of action and hits like Billion Dollar Babies and Hey Stoopid. Nightwish with new singer Floor Jansen receives ecstatic reactions, Metal Queen Doro celebrates her 30th anniversary of being on stage, and Sabaton sings with a huge audience choir in the midday sun. Mr. Rock N’ Roll himself, Lemmy Kilmister, hits the stage, ignoring recent health issues that caused several show postponements. In blistering heat, Motörhead delivered a shortened set, blasting through Damage Case, Metropolis, Over The Top like only they can. Deep Purple have been equally groundbreaking as the genre‘s forefathers and played Wacken for the first time. The fans were not disappointed, as shown during their classic Lazy.

And the list goes on: the Thrash Metal wake-up call that Annihilator opens the festival with, the wild moshpits during Anthrax’s classic-filled set, the big epicness of Lingua Mortis Orchestra feat. Rage and surprises like Ugly Kid Joe, who invited Motörhead guitarist Phil Campbell for their rowdy rendition of ‘Ace Of Spades’.