LITA FORD DISCUSSES BEING A FEMALE GUITARIST IN A MALE DOMINATED INDUSTRY, HER NEW BOOK AND THE TIME ROBERT PLANT ASKED HER TO PLAY BASS IN LED ZEPPELIN 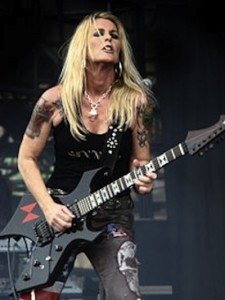 Sarah Grant of Rolling Stone spoke with guitarist Lita Ford. Excerpts from the interview appear below.

Rolling Stone: Hair metal wasn’t exactly a welcoming genre for female musicians and life on the Sunset Strip is portrayed as a boys’ club. How do you reflect on that period of your life?

Lita Ford: I was pretty oblivious to the fact that I didn’t have a penis between my legs. It never dawned on me. All I knew is that I had fingers and I had the lust for hard rock. I wanted to play it and that’s what I went by. I never thought, “Oh, I’m not a dude and chicks don’t do this.” A lot of people in the industry thought it was wrong and didn’t want to accept the fact they were producing a female artist. Even some of my bandmates I had trouble with. They would think, “If she can do it then I can do it.” They’d come back a few years later and say, “Do you still need a guitarist?”

Rolling Stone: Taylor Swift at the Grammy Awards spoke about men in the industry taking credit for her work. Does that ring true for you?

Lita Ford: All the time. Mostly in the earlier stages of my solo career, during my first solo album, Out for Blood. As things went on, it seemed to get better. … The only people that accepted me as a musician was other musicians. People like Edward Van Halen, Billy Sheehan — true musicians like them accepted me.

Rolling Stone: You almost left [your first band] the Runaways early on after finding out that three-fifths of the band was gay or bisexual.

Lita Ford: I didn’t know what it was and I was 15. It freaked me out. I was completely ignorant. I don’t even think my parents knew what being gay was. A long time after [the Runaways], my mother rented a video from Blockbuster and it was porno and she didn’t know it. So she brings it home to watch with her girlfriends and it’s two guys getting it on. So she calls me up and explains it’s not the movie she wanted, but it’s two men having sex, and I said, ‘Yeah?’ And she said, ‘Do they really do that?’ I said, ‘Yes, mom, they do.’

Rolling Stone: You wrote about several other famous musicians who recently died, like Lemmy Kilmister who cowrote one of your biggest songs Can’t Catch Me after a drug-fueled night at the Rainbow. Were you close to him before he died?

Lita Ford: I was. My bass player Marty O’Brien and I had been invited to perform a Motörhead song at a party for Lemmy, which was about a week before his passing. He looked frail. I don’t want to remember him like that, because that’s not the Lemmy I knew. Cancer does terrible things to people. But he went happy. Lemmy lived the way he wanted to live. He did what the hell he wanted to do. He was there a week prior to his passing because he didn’t want to lie in a hospital bed, instead he said let’s go rock out. It made him feel better.

Rolling Stone: Did you ever tell John Paul Jones about the time Plant asked you to play bass in Led Zeppelin in 1975?

Lita Ford: No [laughs]. I didn’t take [Plant] seriously. I thought, “You’re going to replace one of my favorite bass players on the planet with a 17-year-old girl? Are you drunk?” And I walked away! I took it as a compliment, hugged him and we talked about music for a while.

Rolling Stone: It was risky to detail the high-profile trysts you had with people like Jon Bon Jovi, Eddie Van Halen and Nikki Sixx. There’s a double standard that women can’t be respected musicians and date musicians at the same time.

Lita Ford: I didn’t think like that. I was just surrounded by rock stars. It’s like if you work at a bank and end up dating a bank teller. I was in a rock band and ended up dating rockers. Plus, none of us were married then. We were free spirits.

Rolling Stone: You wrote that Sharon Osbourne suspected you slept with her husband, Ozzy, the night you wrote Close My Eyes Forever together in 1987.

Lita Ford: I’m guessing that’s what she thought. We haven’t spoken since then. I know at the time she was managing me, Ozzy had a lot of drug issues. He was at his worst. He was messing around and doing things he shouldn’t have been doing as a married man. I can see why Sharon would think I was one of those girls. But I would never have done that to Sharon. I loved her as a human being and as a manager.

Rolling Stone: You wrote a lot about how deceptive rock stars can be, particularly Ozzy’s Black Sabbath bandmate Tony Iommi.
You allege that he physically abused you during your engagement. Did he ever reach out to atone for what he did?

Lita Ford: No. We actually reached out [to Iommi] before we released the book and he never responded. We haven’t spoken since those days.

Rolling Stone: One of your first guitars was a chocolate Gibson SG, because you thought it was the one Iommi played. A decade later, you had to teach him his own riffs because he was too high to remember them. What was that like?

Lita Ford: It leaves you bitter. It hurt me to discover that this person I thought was a God could be so f–ked up and so mean. He wasn’t the person who I fell in love with or the person I had worshipped. Still today, I worship the musician because of what I remember about him, his guitar playing. I forget the rest. He’s probably totally clean and sober now. Back then there were just a lot of drugs flying around. It was almost like being with Elvis Presley — he could pick up the phone and have four doctors at his doorstep. He would get jars and jars of pills and cocaine on a daily basis.

The abuse didn’t start right away. The punch in the eye on the airplane was the first actual hit I took from him. He waited for a place where I couldn’t get away. I didn’t think he would do it again. I thought maybe it was the drugs, maybe he took something that would make him fly off the handle and once the drugs wore off it would be okay. I went to my mother and said I had a friend who’d been hit by her boyfriend. She said in her thick Italian accent, “Lita, he do it once, he do it again,” and she was right. He did it again and that’s when I took all my stuff and the ring he gave me and went to a pawn shop.

Rolling Stone: You’re back working with some of your pals from the Eighties on your new album, Time Capsule. You can hear the influence of songs like “Kiss Me Deadly” on Taylor Swift’s 1989, one of the the biggest albums of 2015. Why do you think the Eighties are having such a comeback now?

Lita Ford: It just feels like the right time. People that lived the Eighties are getting older and they miss it. Now there are teenagers saying, “I wish I was there for that.” Time Capsule isn’t something I recently wrote — it’s a piece of the Eighties and a lot of musicians from the era contributed like Gene Simmons, Dave Navarro, Robin Zander, Jeff Scott Soto, Rick Nielsen and Billy Sheehan.

Lita Ford’s memoir, Living Like a Runaway is available for purchase now. Read excerpts from the book, here. 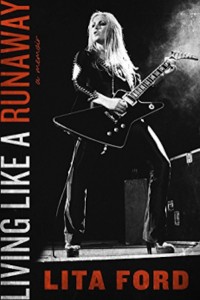