Justin Tedaldi of the Examiner spoke with Judas Priest’s Rob Halford and Richie Faulkner about the Epitaph tour, when metal music peaked, Bob Dylan and their infamous show at Madison Square Garden [in which fans pulled out the seats and the seat cushions and threw them onstage]. Portions of the interview appear below.

Examiner: Epitaph was originally planned as a farewell tour for Judas Priest, and now Priest is doing limited touring. What’s in the future?

Halford: Just to put the record straight, there was never any finality with the idea of the Epitaph tour. I think just to say that it was a farewell tour and you stick the name epitaph, the wires were crossed. We just want to reinforce the fact that it isn’t the end of touring for Priest. We’re still going to go out, but we’re going to go out in a different way that will preserve a lot of things in the band. We’ve always wanted to give a thousand percent, and by taking the breaks we feel are necessary on these big massive world treks, we can keep delivering the goods.

Examiner: There are some pundits who say that metal peaked as an art form sometime between the rise of Guns N’ Roses and the breakthrough of Metallica in the early ’90s. What’s your take on that?

Halford: Five Finger Death Punch, that are gonna be zooming up the charts. Anyhow, what I’m trying to say is that, you know, it’s probably the way that in the entertainment industry and culturally things get thrown under the microscope, and it seems like that’s what it’s all about, and then when it pulls away—this might be a belief—if you’re not completely involved, then it’s losing its edge. And that’s never been the way with metal; in fact, it’s gone in the opposite direction. Now, metal is this massive global phenomenon. Right now as we’re speaking, there are thousands of metal bands playing in different time zones on stages all over the world, you know? Even though I do take your point; it’s a valid point.

There was a time when it was all metal 24/7 and hard rock 24/7 with the likes of Guns N’ Roses and Metallica. But we’re in a different world now, in the way that we exchange information. And in those days around the ’80s, it was a pretty limited way of getting your message across. You had MTV when it was MTV, you know, music television, videos all the time. You had certain rock radio stations that, again, most of them have fallen by the wayside. One minute you’re listening to your great rock station, the next morning, it’s salsa music, you know? That’s the cutting part of the music industry; it’s kind of sad, but that’s the reality of it.

But where we’re at now is, you’ve got all these different platforms. You’ve got your MySpace, your Facebook, you’ve got people tweeting, texting, people are making their own web designs for their own bands. And it’s just a different animal in terms of how the industry was in the ’80s. But the good thing about all that revolution is that now it is in the hands of the fans. In the old days, the radio station was told by the label to play what songs, and that’s how you broke an act. You don’t do that anymore; that doesn’t happen. That shouldn’t have happened, but that was the model in those days.

Now, it’s entirely in the hands of the fans, which is a great idea when you think about it, because all music is driven by the people that love that particular band, that particular artist. And now, [across] all different platforms in the industry, here are the fans leading the charge, and the rest of the industry is servicing the extra industry as you need. It’s been remarkable, really, as a musician, to see that side of the business go the way that it has.

Examiner: The name Judas Priest was taken from a Bob Dylan song. As label mates with Dylan, both now and in the past, did he ever have any comments about that?

Halford: I met Bob Dylan once in my life at the Sony [Music] Studios when I was in a band called Fight, and he was doing some recording in other parts of the building. Somebody said, “Bob Dylan’s here; would you want to meet him?” and I said, “Yeah!” Who doesn’t want to meet Bob Dylan?

Halford: So I’m walking through the corridors, twisting and turning, and there’s a room like this. And Bob’s sitting there, and he’s got, what, six chicks around him.

Faulkner: Has he really?

Halford: Yeah! He’s got six chicks around him.

Examiner: What year was this?

Halford: And we chatted for a couple of minutes, but I was star struck, you know? I still get star struck by people that I love and I admire. I left going, “oh my God, I’ve just met Bob Dylan. You shook Bob Dylan’s hand; it was a real treat.” But the name Judas Priest has always been magical; it’s always had that kind of mysterious quality. It’s the two words: “Judas”—we know what Judas did—and then “priest,” that yin-yang, light and shade, good and bad, positive-negative, you know? It’s been a fantastic name for this band for all these years, and it still is now.

Examiner: When did you first start being called the Metal God?

Halford: It just grew as a groundswell thing that came from the fans and friends in the business, you know? It’s great; I’ve always taken it as in an affectionate way, you know? It makes me realize that I’ve got a role to play and that a lot of people count on me for doing the best that I can possibly do in metal. So it’s like a little flag that’s always in the back of my mind: “what would the Metal God do?” I think it’s fallible; it’s useful to take that type of nickname and put it to good use.

Examiner: Richie mentioned earlier that the band is still banned from Madison Square Garden since its infamous gig in 1984…

Halford: We are, although I did appear there with the Halford band when I opened up for [Iron] Maiden a few years ago, and I was interested to see what would happen when I got in the building.

Examiner: Is the ban still in effect?

Halford: I don’t really know. We haven’t been back since that day. If we are still banned, which I doubt…

Examiner: I was thinking that’s why you played the Izod Center on the Epitaph tour instead of Madison Square Garden, although I know it’s a real metal stronghold in New Jersey.

Examiner: They’re in the middle of a renovation now, so maybe that might help the process.

Faulkner: “We’re taking the seats out, so come on.”

Halford: That was a crazy night. I’ve got some amazing pictures from that event…a bit of rock and roll history, for sure.

Read more at the Examiner. 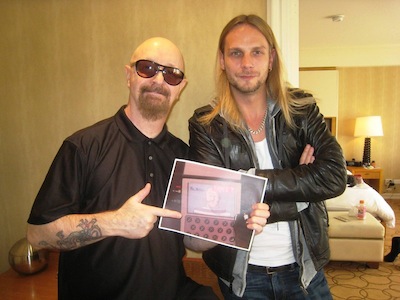