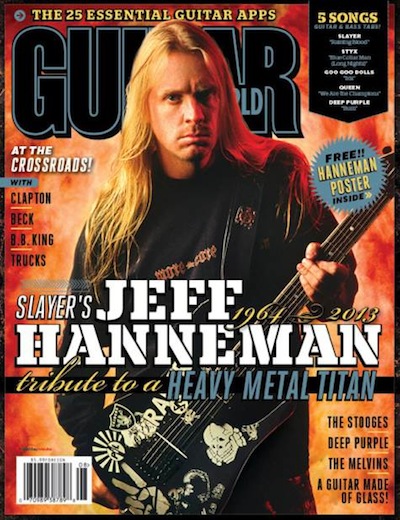 Kathryn Hanneman, the wife of late Slayer guitarist Jeff Hanneman, is interviewed in August 2013 issue of Guitar World magazine. An excerpt from the article appears below.

In January 2011, an incident occurred that many would later assume was the cause of Jeff Hanneman’s death but wasn’t.

Jeff was bitten on his right arm by an insect that was carrying a flesh-eating disease called necrotizing fasciitis. Reports circulated that it was a spider that bit Jeff, but that was never confirmed. Whatever bit him, it was enough send the guitarist’s life into a tailspin.

“Jeff had been visiting a friend in the L.A. area,” says Kathryn, his wife of 24 years. “He was in the Jacuzzi one night relaxing, and he had his arm over the side, and he felt something, like a bite or a prick. But of course he didn’t think anything of it. He came home about a week later, and he was pretty well lit when he came through the front door. He wasn’t feeling well, and he just wanted to go upstairs and go to sleep.

Before he did he said, ‘Kath, I need to show you something, even though I really don’t want to.’ And he took off his shirt, and I just freaked out when I saw his arm. It was bright red and three times the normal size. I said, ‘Jeff, we need to go now. We need to get you to the ER.’ But all he wanted to do was go to bed and sleep, and I knew that I was trying to rationalize with a very intoxicated person. So there was nothing I could do that night. But the next morning I convinced him to let me take him in. He didn’t have a lot of strength, but I was able to get him into the car.

When we got to the hospital in Loma Linda, they took one look at him and they immediate[ly] knew what it was, so they took him right in. Jeff told me to go home because we both knew he’d be there for hours and neither of us thought it would be a life-or-death situation.

The next few days for the Hannemans could only be described as nerve-wracking. Jeff was in the ICU in an induced coma after the initial surgery and breathing through a tube, his arm, for the most part, intact. Doctors attempted to remove the breathing tube at one point, but Jeff was unable to breathe on his own. Finally, after about the fourth day, the tube was removed and Jeff was breathing again. Her husband was alive, but as soon as they removed the bandages from Jeff’s arm, Kathryn knew the road to recovery would be long.

“I’ll never forget it—I couldn’t believe what I was seeing,” she recalls. “All I could do was look up at the doctor and say, ‘How the hell do you fix this?’ And he said, ‘You know, Mrs. Hanneman, you’d be very surprised.’ And at that moment I had all the faith in the world that this doctor could fix his arm.”

Back home soon afterward, Jeff could begin the process of rehabilitating his arm in the hopes of regaining his ability to play guitar. The next few weeks saw more surgeries, staples and multiple grafts using skin from his left thigh. Wound-care suction devices were on hand to draw out the infection and help the skin grafts take. Physically, Jeff’s arm was on the mend. Emotionally, however, he was struggling. Depression was setting in.

“I couldn’t get Jeff to go to rehab or therapy,” Kathryn says. “I think he was letting the visual of his arm get to his emotions, and it was messing with his mind. It was hard to keep him upbeat at that point.

I think he thought he could do this on his own—that he would just to go rehearsal and play, and that that would be his rehab. But I think he started to learn, once he tried rehearsing, that he wasn’t playing up to his ability and that he wasn’t able to play guitar at the speed he was used to. And I think that really hit him hard, and he started to lose hope.”