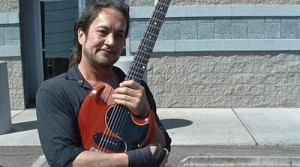 Darren James Smith appeared on the band’s 2014 self-titled debut album, but left in March over concerns regarding touring plans. His replacement Michael Beck lasted just a few short weeks before former Lynch Mob and Jason Bonham man Chas West signed on – only to replaced by Paul D’Eath, who’s now out of the picture.

Crosby says, “I will be singing for Jake E Lee’s Red Dragon Cartel for the month of July and, hopefully, for many months and years after. That is, if we can all play nice in the sandbox together! I’m sure we will. I couldn’t be playing with a cooler bunch of guys.”

Red Dragon Cartel’s album was Lee’s first after more than two decades away from the music business. Last year he said he was resisting calls to record a follow-up – and he’d consider shutting the band down if the pressure became too much.

GEOFF TATE’S OPERATION: MINDCRIME TO UNLOCK PART ONE OF EPIC MUSICAL TRILOGY WITH RELEASE OF “THE KEY” ON SEPTEMBER 18TH ON FRONTIERS MUSIC SRL ›