IRON MAIDEN TO PLAY SEVEN “SELECT” SHOWS IN THE U.S. IN SEPTEMBER

Iron Maiden will make a brief return to the USA this September, playing seven specially selected shows en route to Latin America where they will once again headline at the legendary Rock In Rio Festival, Brazil, on September 22nd, their show there having recently sold out to 70,000 fans in just a couple of hours.

These will begin with a first-ever visit to Raleigh, North Carolina, for the opening show on September 3rd at the Time Warner Cable Music Pavilion followed by taking metal back to country music capital Nashville, Tennessee where Maiden haven’t played in over twenty years, at the Bridgestone Arena on September 5th. There will also be shows in Kansas City, Missouri, Sprint Center on September 7th, St. Louis, Missouri, Verizon Wireless on September 8th and the Mandalay Bay Events Center in Las Vegas, Nevada on September 12th, all of which the band last visited way back in 2000 on the Brave New World tour. Plus a return to Austin, Texas for a show at the 360 Amphitheater on September 10th, the first time the band have played in that city since the original Seventh Son Of A Seventh Son tour twenty-five years ago!

Very special guests on all these dates will be Megadeth.

Before they finally head south towards Brazil, Maiden will also headline a very special event at the San Manuel Amphitheater, San Bernardino, California. The Battle Of San Bernardino will take place on Friday, September 13th. Anthrax, Testament, Overkill and Sabaton will join tour special guests Megadeth for this performance only, making for a big, loud and exciting day out for metal fans in Southern California.

Commented Iron Maiden singer Bruce Dickinson, “As Maiden fans know, we’re going back to Brazil to headline Rock In Rio again, so we thought that on our way down south we should certainly stop off and do a few more shows in the U.S if we possibly could. We especially wanted to try and play some more cities we’ve not visited for a while, so we’re really excited about seeing our fans again in places we’ve not been to in over a decade, and in some cases over two decades, and for our first-ever visit to Raleigh! We’ll be bringing with us the same full production we had on the Maiden England tour in North America last year so fans can expect to see the huge lightshow, stage set, various incarnations of Eddie, plenty of pyro and all kinds of other exciting stuff.”

Added bassist Steve Harris, “We know how popular the History Of Maiden tours are with fans of all ages and we love visiting cities we haven’t been to in many years as it gives us a chance to play to new audiences. We had a huge amount of fun with the setlist for this Maiden England tour when we opened in North America last year as we got to play songs we had not played in a very long time, like Seventh Son, The Prisoner and Afraid To Shoot Strangers, as well as fan favorites like The Trooper, Aces High, The Clairvoyant, The Number Of The Beast, Wasted Years and Run To The Hills. That opening leg of the tour was so enjoyable for the whole band, we’re really looking forward to coming back to see our fans again and a lot of new faces too!” 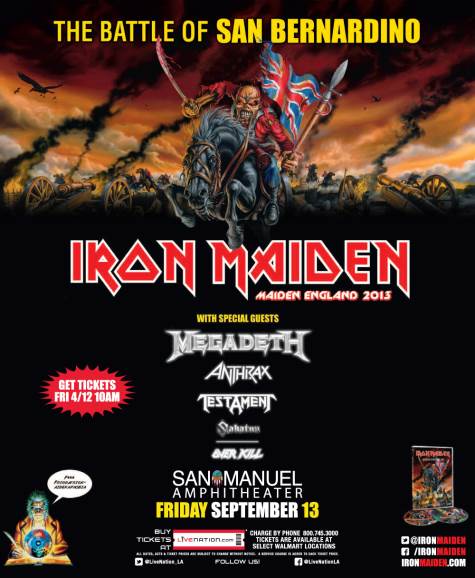