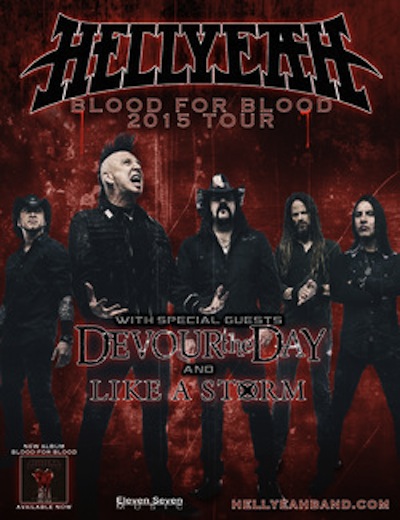 After a hugely successful US arena run with Volbeat and labelmates Five Finger Death Punch and Nothing More, Hellyeah will head back to those markets for a triumphant headline run, with special guests Devour The Day and Like A Stoem in tow. The band celebrates their first-ever Top 10 radio single Moth, and its companion video which has nearly reached 1.5 million views and can be seen below.

The band is excited for this headline run “After supporting some great bands for nearly all of 2014, we are excited about being a headliner and bringing you nearly all the music off Blood For Blood live,” says Vinnie Paul. “We can’t wait to see you guys and destroy!!! Cheers, hellions!” Devour The Day bassist Joey “Chicago” Walser adds, “I feel more excited about this tour than any other previous. These are great cities filled with great people. We are honestly so ready to reconnect with our music family.”

Hellyeah’s Blood For Blood is a welcome return to form. It leaves a mark, thanks to songs like the Sangre Por Sangre (Blood For Blood) and Demons In The Dirt. Then there is moodier, more contemplative fare like the current hit radio single, Moth which connects on an emotional, cellular level. “Hellyeah lock and load their most crushing and catchy salvo yet with Blood For Blood. Its unmitigated, unbridled, and unique energy makes for one of the best heavy records of 2014 and the band’s definitive offering to date. It will leave you bloody and smiling,” says Rick Florino of Artist Direct.

Devour The Day was one of music’s biggest Cinderella stories of 2013. Good Man, the first single from their self-produced Time & Pressure debut album (released May 7th, 2013), reached the Top 10 on the “Active Rock” chart and Top 15 on the “Mainstream Rock Tracks” chart. Devour The Day was one of the Top 40 most spun artists of 2013 at Active Rock stations nationwide. They’ve toured with In this Moment, Butcher Babies, Three Days Grace, Sevendust, and shared the festival stage with, Rob Zombie, All that Remains. The latest single release, Respect, reached the Top 20 on Mediabase’s “Active Rock” chart last September.

Hellyeah with Devour The Day and Like A Storm dates: