GUITARISTS BUMBLEFOOT AND CHRIS CAFFERY, SINGERS MARK TORNILLO AND BOBBY BLITZ AND OTHERS TO PARTICIPATE IN “ROCK AGAINST DYSTROPHY” ON AUGUST 21ST IN NEW JERSEY 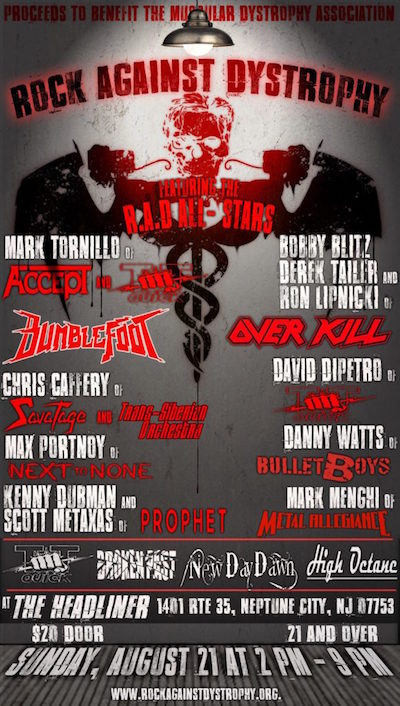 On Sunday, August 21st 2016 the Rock Against Dystrophy All Star Edition 2016 benefit concert will be at The Headliner in Neptune, New Jersey. The show will have TattooTony return to MC the event. The benefit will feature performances by High Octane, Broken Past, New Day Dawn, a special set from New Jersey’s metal legends T.T. Quick and will wrap up with a performance from the RAD All Stars.

As if all those individuals weren’t enough, things are kicked up a notch literally as Bumblefoot is joining the RAD All Stars. Still creating tons of talk with his latest album Little Brother Is Watching and stepping into Metal Allegiance to shred like no other, he is taking the time to give to fight against Muscular Dystrophy the extra kick only he can bring.

Tickets can be bought now at radallstars2016.brownpapertickets.com.