GUITARIST TOMMY THAYER ON HIS TIME WITH KISS, “I’VE BEEN THE LEAD GUITARIST IN [THE BAND] LONGER THAN ANY OTHER KISS GUITAR PLAYER” 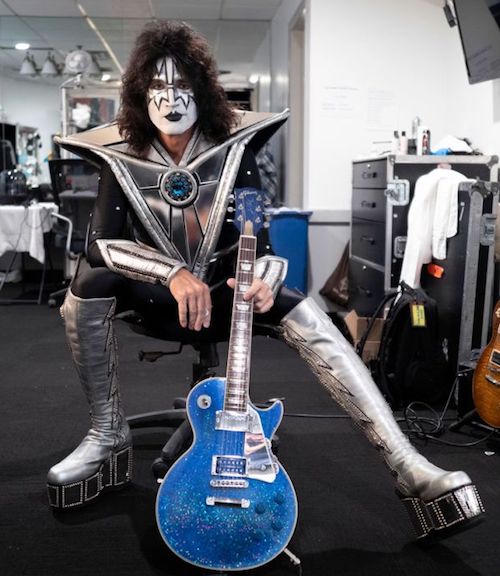 Guitar World: Have you made any changes to your rig for the recent KISS tours?

Tommy Thayer: I’ve been tried and true for over 15 years. I probably have four of those Duotones with me and I run three cabinets on stage – one is underneath the drum riser and then two are offstage running in stereo. It’s a traditional guitar-into-the-amp kind of sound.

Guitar World: How would you compare your signature Les Pauls to a regular Les Paul?

Tommy Thayer: The Les Pauls I play on stage are made by the Gibson Custom Shop – they’re not my signature models. I’ve done four different signature guitars with Epiphone through the years…

…They’re all guitars like I said, modeled after a ’58 or a ’59 Les Paul Standard. But they’re enhanced aesthetically with the finishes that look cool and look very ‘KISS.’ Mirror pickguards and stuff like that.

Guitar World: How has your guitar playing changed since you started playing with KISS?

Tommy Thayer: I like to think that I continually get better. [Laughs] I still work on it – I still practice. I’m more comfortable now than when I first got in the band 20 years ago. But that’s to be expected…”

Guitar World: Which KISS songs are your favorite to perform live?

Tommy Thayer: My favorite KISS song when I heard the first KISS album [1974’s Kiss] was Black Diamond. I still love playing that one live.

[Original KISS guitarist] Ace [Frehley] had some fantastic, very signature solos back in the day, and I love playing those solos. Every kid grew up on that stuff, and I’m the one that gets to play it night after night, so I’m very fortunate in that regard.

Detroit Rock City. Another fun one is God Gave Rock n’ Roll to You II – with a great Bob Ezrin-esque melodic guitar section in the middle of it.

Guitar World: Is this really the end of the band?

Tommy Thayer: You’d have to ask Gene [Simmons] and Paul [Stanley] that question. That’s the plan, and legitimately what we’re doing.

None of us are getting any younger, particularly Gene and Paul – they’re edging into their 70s now. To do a KISS performance, it takes a lot more than your average band to do this. KISS is in a different category in terms of the physicality and what it takes to actually do a show. ..

Guitar World: What are your plans for after KISS?

Tommy Thayer: I don’t have any. I’m not a ‘What are you going to be doing in five years?’ kind of guy. I’m just looking at today and focusing on that…

Guitar World: What do you think your legacy will be with KISS?

Tommy Thayer: I don’t know if many people realize this, but I’ve been the lead guitarist in KISS longer than any other KISS guitar player. But I will always be known as ‘the new guy’ though – no matter what happens. I’m ‘the Ronnie Wood’ of KISS

My legacy will be a guy who came in, worked hard, and was the glue that kept the band together for a long period of time. I think the kind of character and personality that I have is that of a team player and somebody who can bring people together and bind things together.

And I think the reason that we’ve done so well and so consistently in the last 20 years is because of the personalities, the give and take, and the ability to keep everybody happy… and keep working together on a professional level.

It works well. I’ll probably be that guy that has been in the band longer than anybody else besides Gene and Paul, that kept things together, and was the glue that made it work.