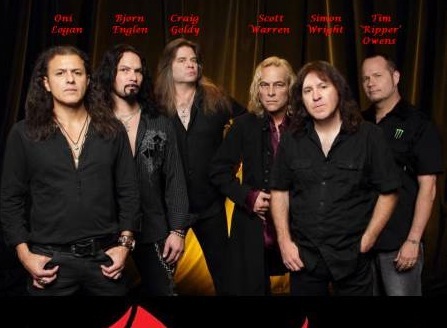 Songfacts: How has it been touring with Dio Disciples so far?

Craig Goldy: It’s good. For those who love Ronnie and miss him, which all of us do, that’s the hard part. And then the easy part is seeing people enjoy the music again, because the main key was to keep Ronnie’s memory alive. So the people that go with us, like Tim Ripper Owens and Oni Logan, and at the beginning Toby Jepson, they all had a heart for Ronnie, because they were either close friends or close to the inner circle of the Dio family. So with that heart, they performed that music that way. And it would come across.

So we never knew when, but there was always going to be a special moment when a group of people gather together in the same room for the same purpose with the same heart, mind, and spirit. Something very special happens because of that. That’s usually what happens during the performances: there’s a moment when the band and the audience connect as one and you can see people just singing to the sky and tears rolling down their cheeks, because they miss him so much, and the music has made such an impression on them because it’s been a big part of their lives throughout the years. It’s like a memorial service in every city and country we go to. That part of it is really amazing.

Songfacts: As far as the singers, do you ever see or hear similarities between when, say, Ripper is singing compared to how Ronnie would sing the songs?

Craig: There are definite similarities, and thankfully so. Because we want the songs to be represented well. Nobody’s like Ronnie. Nobody.

Songfacts: Has there been any talk about Dio Disciples doing an album of all new material?

So when Wendy Dio heard the songs that I’ve been working on, she said, “Wow, Ronnie would be really proud of you.” That was real special. So we’re probably in the first phase of what would be a live CD with a couple of bonus tracks of original material.

Songfacts: What do you remember about your first meeting with Dio and what your initial impressions were?

Craig: Well, I was a kid, I was like a teenager. And Ronnie was and still is my favorite singer. Every time I say that I get chills running down my back. So it was amazing for me. I was living on the streets in a car, and I was working with a guy named Perry McCarty, who became the singer of a band called Warrior. I liked his voice because he had a similarity to Ronnie’s tough sound.

So he left and went up to LA to join Warrior, and he felt bad about leaving me behind in San Diego. So he said if I give him some copies of my demo tape he’ll pass them around.

That band Warrior became friends with Rough Cutt. And sure enough, with my last $20 I made by giving guitar lessons, I made a demo, and that got into the hands of the drummer of Rough Cutt, who then played it for Ronnie, and he said, “We’ve got to get this kid up here.”

Apparently he was impressed with that demo tape enough to be present at the day of the audition, and they were saying that he wanted to meet me. I thought, “No, I want to meet him.”

He and Wendy were there. Wendy was his manager and also the manager of Rough Cutt. I got a chance to tell him how much his music meant to me and that he was, in fact, my favorite singer and I used to learn his melody lines on my guitar and I thought his lyrics were really cool because he was saying one thing but really meaning another. And he said, “What do you mean by that?” And I told him, “Well, I thought when you said this, that you really meant that.” And he grabbed my arm and he goes, “That’s right.”

And little did I know that was going to be the beginning of something later. It was almost like I cracked his little personal code. So during the audition he got inspired, which he never does. He doesn’t like to sit in and jam with people. He sat in on the audition, and we did Man on the Silver Mountain and Heaven and Hell. During that audition he came up to me, cheek-to-cheek, whisker-to-whisker, and was whispering in my ear, “What’s the lyrics to the second verse?” And I said, “The lover of life.” “Oh, right, ‘I’m the day, I’m the day,’ oh, right!”

He had filed his lyrics away because he was writing for Holy Diver. That spawned another thing that I didn’t know until later on, because it happened between him and I and his lyrics. But that was a very meaningful thing for me to meet him and then for me to actually perform with him.

Then they asked me to play a riff that I had to see if any of my original material was going to work with the band that he sang on. It was just a magical night for me to meet him and Wendy and to have that happen.

Then at the end of the night he goes, “If I have anything to say about this, which I do, you’ve got the gig.” [Laughs] The next thing I know I’m at his house, just me and him – I was invited over just to sit and talk and watch old Rainbow videos and stuff. We became friends and we worked really well together in the studio doing demos.

Craig: Yeah. He was a great guy. It actually came from a failure, which often happens. Me and David Isley from Giuffria were working on a project, and Geffen Records had given us some money to go into the studio. We wrote some songs and then they passed on it, so I sent those songs to Warner Brothers to see if maybe one of these songs might be used for another project or band, and it sat around for a couple of years.

Next thing I know I get a call from David Lee Roth at my home. He goes, “Hey, Dave Roth here. Is this Craig? Hey, I liked your shit, man. Can we do some more? Have you got any more?” I’m like, “Yeah, I’ve got tons of stuff.” “What about Wednesday?” It was Monday. I go, “Yeah.” I didn’t have anything. [Laughs] So I just scrambled. I went and bought his solo albums. I think mine was the third. And so I didn’t duplicate. Because some guys, you never know, you accidentally do something similar and they’ll, you know. So I made sure that none of the stuff he did with Steve Vai or any of that stuff was similar. Not putting myself in the same category as Steve Vai, just didn’t want to accidentally reproduce something that he’s already done.

So I came up with a couple of cool riffs, and then showed up at his house with Bob Ezrin, who worked with everybody. But at the time it was the Pink Floyd thing that got me [Ezrin co-produced Pink Floyd’s The Wall]. I was like, “Wow, David Lee Roth and Bob Ezrin!”

I was playing him some stuff and he stops the tape and he goes, “That’s cool, man, that’s great. Let’s do that.” So he would have me come to his house and play the ideas, and his band would be there and they’d learn my stuff and rehearse it for him to record. We wrote a bunch of songs and I thought what he did was really smart. He wrote about 25 songs and then recorded each and every one of them, demoed them off. That’s one other hurdle that a lot of people miss, is that you write a great song, and then when you record it, something happens, and it doesn’t come out as special as you think it’s going to for whatever reason. So he got that process out of the way: whatever rose to the top, he used, regardless. I thought that was really smart. I’m sure a lot of people do that, but I didn’t know that process at the time, and I was just going through my thing at the time learning all those songs and stuff.

So we spent some time together. We became kind of friends, and he’d invite me out to do stuff and we’d hang out at his house afterwards and talk. He was a great guy, and he was very polite and very funny. He was definitely “David Lee Roth.” That was not a cartoon character he created for his stage presence. That was just who he was. But he was very smart and caring behind the scenes.