GUITARIST CARLOS CAVAZO ON WHY HE LEFT RATT, “I REALLY COULDN’T SEE MYSELF UP THERE [WITHOUT WARREN DIMARTINI] 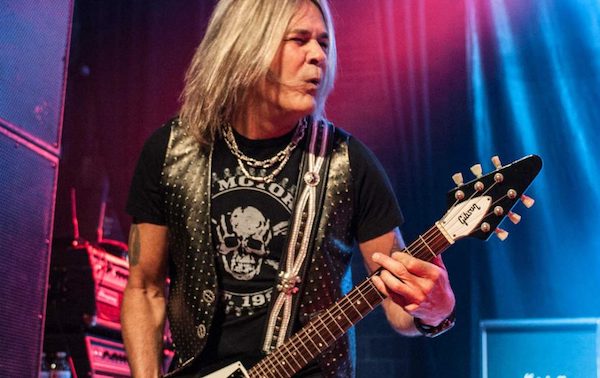 Robert Cavuoto: I think a lot of people were surprised to see that you departed from Ratt after Warren DeMartini left, tell me about that decision?

Carlos Cavazo: Warren didn’t leave; he was actually fired from the band. They wanted me to stay, and I really didn’t want to do it without him. He was the reason I was initially in the band. Without the original members up there it seemed like it was falling apart as they have problems. I figured maybe it’s best that I go my own way. I really couldn’t see myself up there with another guitarplayer. It didn’t seem right.

Robert Cavuoto: I thought you were a perfect fit for the band as you came from that genre; you are a great guitar player and the best replacement for Robbin Crosby. You and Warren made a strong guitar team; it was sad for us fans to see it end.

Carlos Cavazo: Thanks, that’s what everyone thought, and I felt that I fit in really well. I have known the guys a long time, and no matter what happens they will always still be my friends. I know we are going through some rough times now, but they will always be my bros. Hopefully, we will get together someday and play again.

Robert Cavuoto: Is the door open for you and Warren to play with Ratt again?

Carlos Cavazo: I would hope so, never-say-never. I would play with them again if Warren were back.

Robert Cavuoto: I thought of you as the original guitarist of Quiet Riot as that was my initial introduction to the band as a teenager. Was there any concern at the time thatyou were replacing Randy Rhoades as the guitarist?

Carlos Cavazo: To be honest with you, I didn’t even think or worry about it at the time. Kevin had gone through a couple of guitarists before I started working with him. When we got together, we agreed that we were going to stick to a heavier…sound. The first two albums that they put out with Randy were more pop than what we were trying to do. That is probably why it was a different starting point. I never thought about being a replacement for Randy; I don’t think anybody can fill that guy’s shoes.

Robert Cavuoto: Thirty-Five years ago on November 26th, 1983 Metal Health reached number one on the Billboard charts. What was it like for you that day and how did it impact the band?

Carlos Cavazo: We were so busy touring I don’t think we gave it a lot of thought. We had a couple of weeks off, and when we came home, everywhere I went people were recognizing me. I thought “we must be big” as this never happened to me before. [Laughing] Then the money started to come, and we started to be a little well off. Before that, I never had a job that paid good money.

Robert Cavuoto: How many times platinum did Metal Health go?

Carlos Cavazo: I think six to eight times platinum, I’m not sure of the exact numbers but it still continues to sell. All of our records worldwide sold over 10 million albums. It affected us because we got pressure from the record company to keep putting out new records and they were trying to tell us what to do. They should have left us to do what we wanted to do like on the first record. That was why it was such a big hit because it came naturally. There were pressure and control issues within the band too. Some people wanted to control the band more than others.

Robert Cavuoto: If Kevin Dubrow was still alive, do you think the four original members of Quiet Riot would still be together?

Carlos Cavazo: I would hope so as that would be the only way I would be in the band is if Kevin was still in the band.

Read more at My Global Mind.