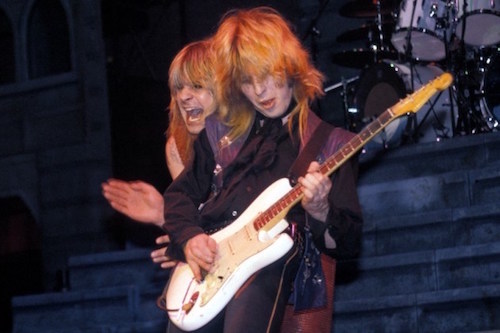 Martin Kielty of Ultimate Classic Rock wrote a feature article on guitarist, Berne Tome, who played seven shows with Ozzy Osbourne, after Randy Rhoads was tragically killed in plane crash. Excerpts from the story appear, below.

Former Black Sabbath vocalist Ozzy was suffering on the road in 1982. The Diary of a Madman tour, supporting the release of his second album, had already featured his notorious bat-biting incident, his collapse on stage, his even more notorious Alamo scandal and a heated disagreement between him and guitarist Randy Rhoads. The singer would later go on to shave off his hair in an attempt to escape his personal torment, while several sets of dates were postponed as he struggled with addiction and depression.

On March 19th, Rhoads was killed during a flight on a small plane. The musicians had loved and respected each other – but they were in disagreement about their future directions when the tragedy struck. Ozzy’s manager and later wife, Sharon Arden, seemed to feel that if Osbourne stopped at that point, he might never return to music. So their thoughts turned to replacing Randy, and they quickly settled on Torme, who’d recently quit Deep Purple singer Ian Gillan’s solo band.

“I’d been on Jet, Don Arden’s label, and I kind of knew Sharon,” Torme told Ultimate Classic Rock. “I was on the periphery of the family, and I’d just left Ian. They thought, ‘He’s out of a job – he’ll jump at it!’” But he had his own album and tour to work on. “Big artists have a thing where it’s totally incomprehensible that anyone would say ‘no.’ When I was saying, ‘I can’t, I have all this going on,’ David Arden [Don’s son] was thinking, ‘He’s probably only saying that to up his price. Typical muso!’”

Bills need to be paid, and so when David offered Torme £2000 a week, and paid a week’s wages in advance, the guitarist agreed to step in – as long as it was only for a month. So he flew out to the U.S. to join a band that included keyboardist Don Airey, bassist Rudy Sarzo and drummer Tommy Aldridge. “When I got there Sharon told me it wasn’t 2,000 pounds a week… it was 200 dollars a week. She said, ‘David’s on drugs. He doesn’t know what he’s talking about.’ I said, ‘But I’ve had two grand already!’ She said, ‘Well then, we ain’t going to pay you anything until it’s paid off.’ Start off on the best footing!…”

…“It was horrible,” he said of the emotional situation. “I was out there on the Thursday and Randy had died the previous Saturday. It wasn’t even a week. I don’t think anyone spoke to me the day I arrived, other than Don Airey. It was a really bad atmosphere, and understandably so. I suppose, on some level, Tommy and Don wanted to carry on. Ozzy had no desire and Rudy certainly hadn’t.”

An audition successfully passed, three days of rehearsals took place, and Torme began to realize the lose-lose position he’d got himself into. “Even if I played okay, even if I played a nice solo or whatever, if anyone looked at me on stage they thought, ‘Oh, s—. It isn’t Randy.’ The first show [April 1 in Bethlehem, Pa.] was appalling. I didn’t have my amps, my pedals and I had one guitar. There were three or four tracks where we re-tuned and I had to use a hire guitar that was a piece of s—. And apart from anything else, I did not know the songs.

“It was incredibly hard to hear anything on that stage – you had the castle and everything, and all I could hear was the snare drum and Ozzy. I was literally stood at the bottom of Tommy’s pyramid, staring up trying to see when he was hitting things. It was really terrifying.”

And Ozzy? “He was having a really bad time. I’d come off stage and he’d be standing at the back, crying his eyes out. Any day off he was out of his face. He wasn’t able to cope. I think he had a terror because his career has been in complete s— for years, and he’d had a kind of life again because of Randy. And again, I had this situation where Sharon and him thought I was just playing hard to get. I was saying, ‘I have to go home in a month – I have this tour booked,’ and they were going, ‘Yeah, yeah, yeah.’ Ozzy, underneath his persona, is really insecure, so Sharon was protecting him by saying, ‘Bernie really wants to do it, Ozzy.’”

On reflection, Torme feels it’s likely that he was Don Arden’s pawn in a political game that stretched across the Atlantic, between Jet Records in the U.K. and their U.S. distributors. “By the time we did Madison Square Garden I was fairly okay. I wasn’t by any means playing what Randy played; I wasn’t even able to try. When we got to MSG I kept saying, ‘When’s the sound check?’ They said, ‘Don’t worry about that.’ I didn’t get a sound check – they told me, ‘The record company demanded that we try out Earl Slick!’ I was pissed off about that. I’m here, I’ve carried off these shows, you keep asking me to stay… and then you do that?”

He only met Night Ranger guitarist Brad Gillis – who would go on to take over the guitar slot in Osbourne’s band on April 13, after Torme had played just seven shows – by accident…He said, ‘I’m here because the label think you’re going to f— off.’ Don Airey was the only person who had any interest in auditioning anyone, so I said, ‘Don, I want to go home. This guy is great. Give him an audition.’ I’d already told Ozzy and Sharon that I was leaving, but that I’d hang on until they found a replacement. Then I discovered they were carrying a replacement but they wouldn’t audition him!…”

…[Torme] went home the next day, believing that his frontman still had a low opinion of him. “When I’d gone to their hotel suite to say, ‘I’m going to leave,’ Ozzy had looked absolutely flummoxed. Sharon said, ‘It’s because he wants to play a completely different type of music, Ozzy.’ It was protective, and I understand it, so I’d just gawped and said, ‘Yeah!’
“I saw Oz when they did the U.K. tour. Rudy had left and they had Pete Way on bass, and I think Don had left too. We had a laugh, but it was very stressed because there was a massive row in the dressing room between Tommy and Pete. I came away thinking, ‘I’m glad I’m not doing this!…’”

“…For years I regretted that I hadn’t met Randy,” he said. “Five or six years ago I met his brother Kelly and had a long chat. There were a lot of things I didn’t know. He was half-Irish; I’d always thought he was pure Yank. That’s a small, tribal thing to say, but it made a difference to me. It helped with the emotional aspect.
“People just don’t understand what it was like. You get the most inane comments, and people are allowed to say anything, but it was emotionally a terribly hard thing for me. I still have nightmares about it.
“I’m glad I was able to keep people’s wages being paid, but at the same time I think, ‘Would you have done it if you hadn’t been offered two grand a week? You selfish bastard!’ But then I think, ‘Ah yes… but I did good.’”