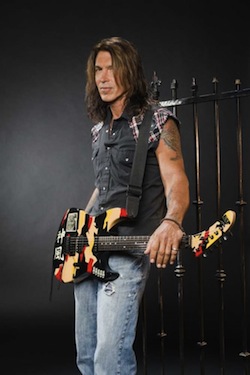 Lynch discusses topics such as how he started playing guitar, his unique sound and playing style, the five projects his is currently working on, including Shadowtrain, his home studio and his long term relationship with guitar makers, ESP. I have transcribed some highlights from the discussion below.

On how he hooked up with Dokken:

“I was already in Dokken when I got the serious call from Ozzy and I took a little leave of absence. During my leave of absence, they got Warren DeMartini from Ratt to fill in for me, and when it ended up not working with Ozzy, I came back and didn’t have my gig. So, I joined Ratt. So, for a while, we were in the wrong bands. But, we were rehearsing in the same building and we all know each other. So, we just got to a point where we were like, ‘This doesn’t make any sense. Why don’t I just get back with my band? You go back to your band.’ So, we got back to where we belonged…It wasn’t right because they were complaining about him and I didn’t want to be playing with these guys.”

Discussing his projects KMX (with Doug Pinnick from Kings X and Ray Luzier from KORN) and T&N (Tooth & Nail):

“We recently did a record, very quickly…eight days. We wrote everything and we recorded everything in eight days. We wrote in the studio, which is really gratifying to do a record like that. We are finishing up vocals for that as we speak. The we are doing a second T&N record. It’s the guys from Dokken without Don with guest singers. So we’ve already recorded the Dokken material, which is half the record. Actually, when I get home from this trip, I go back into the studio with Jeff [Pilson] and we start working on the original half of the record.”

Speaking about Souls of We:

“Souls of We is kind of done. We did one Souls of We record which took five years. It was very painful, but rewarding, and then we went to do a second Souls of We record and we had some issues with members of the band and the recording process. So, it turned into a George Lynch record called, Kill All Control.”

“A Lynch Mob EP came out last year called Sound Mountain Sessions. We have an acoustic EP coming out called Sugarhill Sessions recorded in a recording studio in Houston, Texas called Sugarhill Studios, which is historically significant. It has a lot of history. Johnny Cash, Buddy Holly and all those guys. It’s a great old analog studio.”

Watch the entire 23 minute interview below.