FORMER VIXEN VOCALIST JANET GARDNER DISCUSSES WORKING WITH HER HUSBAND AND PREMIERES HER NEW SONG, “YOUR PLACE IN THE SUN” 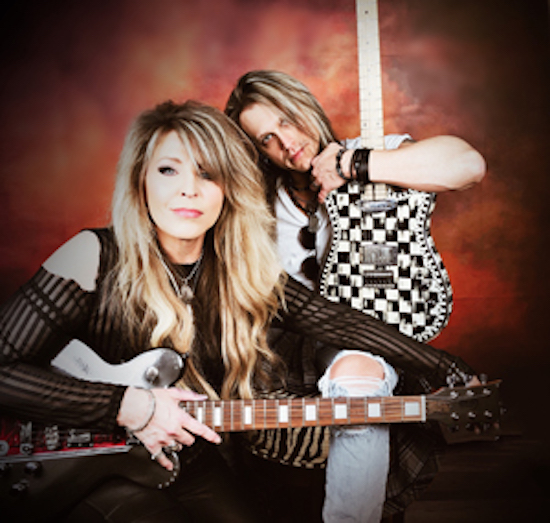 Ruben Mosqueda of KNAC.com spoke with former Vixen singer Janet Gardner and her co-writer, and guitarist husband, Justin James, about her new solo album, Your Place In The Sun. Excerpts from the interview appear, below.

KNAC.com: Janet we know about your history with Vixen, the departure from the band, and you wanted to write songs that you wanted. You’re going by Janet Gardner and not under a band name. Justin, you’re very involved in the writing, recording and perfroming on the albums, so you could have easily named this something else.

Gardner: Good question. When we first started talking about doing this, we threw around the idea if this was a band or should we be a duo. After much deliberation we decided that we’d go with Janet Gardner because I have somewhat of an established fanbase. I think even if some people might not know Janet Gardner they’re familiar with Vixen and they’ll be like “Oh, that’s the singer from Vixen I know who that is.”

James: Janet busted her ass for years [with Vixen] and we never did anything outside of that. I feel that she deserves the accolades for this.

KNAC.com: What are you two doing to make this remain a healthy environment to work and create? In a lot of cases, people who are married or together as a couple can’t work together.

Gardner: I think for us, we worked on our own careers for a while before we even discussed working together. To be honest, we never really talked about it or seriously considered it, it just happened. We knew when we started working with each other that there was always a threat that it could drive a wedge between us on a personal level. There was a lot of trust there and we didn’t put too much pressure on it to work. The more we worked together, the more comfortable we became and it just worked out great.

KNAC.com: There’s a number of great tracks on this album. Tell us about, Your Place In The Sun, what’s the inspiration behind that one?

Gardner: Oh, that’s a great one. Justin came up with that fantastic riff. We quickly got to work on that, we wanted a heavy driving track with a positive message. We have kids, they’re in their adolescent age and it’s tough out there. We wanted to drive home the message that no matter who tries to knock you down, no matter what happens, hang in there and eventually you’ll be comfortable in your own skin. It took me a lot of years to do that, I know that. It takes time for you to be able to accept who you are.

KNAC.com: Janet, you recorded your first ever solo ever on this album, is that correct?

KNAC.com: I didn’t recall seeing in the liner notes what song that was?

Gardner:: It’s the solo on Kicks Me Back. I never did that on any of the [Vixen] records because my role there was to write songs and my “instrument” is my voice. It was fun to record and Justin was so supportive. I think it turned out great, so it stayed [laughs]. Don’t get used to it. I like moving around stage![laughs].

James: Janet is known for her voice. As you know, she plays guitar on stage but she got her chance to showcase her guitar skills. I’m so proud of her.

Listen to Your Place In The Sun, below.