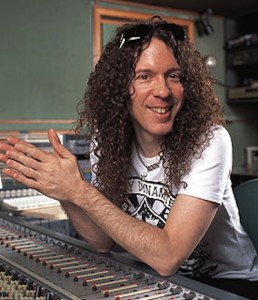 Steven Rosen of Ultimateguitar.com interviewed former Megadeth guitarist Marty Friedman, who had some interesting comments about legendary guitar player, Jimi Hendrix. Read Friedman’s thoughts on Hendrix, and other topics, below.

UG: In the last 10 years since you previously played in the US, the metal scene has definitely changed. Are you aware of any of those changes?

MF: Everything I’ve become aware of has been kind of force fed through Prosthetic Records. Not through their artists but through the people at the record company there and only for practical reasons. For example, choosing opening bands [Exmortus] and people that I should know and people I should hear. Some things I found on my own.

UG: What did you find?

MF: This band called Deafheaven. I totally recommend them. It’s fresh and it’s mindblowing. I love these guys. And of course I’m good friends with Sky Harbor and I’m a big fan of theirs. Just the sheer amount of guitar music that has come out in the last couple of years is very encouraging. I have to be thankful that a lot of these people are so kind to cite me as an influence.

MF: It’s not enough. You have to do something that makes people happy and that takes a lot more time than just developing abilities on the instrument. For all the guitar players and guys like Jeff Loomis and all these guys who are really, really good, they’ve been for around for a while and it’s taken a while to get their stuff to the people. I applaud all these guys who have taken their abilities and shaped them in such a way that many more people can enjoy them rather than just beginning guitar players.

UG: What are your feelings now looking back on Megadeth?

MF: I wouldn’t have wanted to bypass any of the Megadeth stuff. It was wonderful. The music was important but it was also much more important to be able to, like they say in kindergarten, play well with others. A lot of people qualities: a lot of learning about how to deal with people; deal with situations; deal with people from different cultures; and every possible situation completely unrelated to music happened in Megadeth. So it was such a great life rewarding experience that it can only help to grow as a musician from that. I strongly believe that people who practice their instrument a lot and study music may become good at it but they’ll have a narrow palette of phrases and things to emote to other people. They’ll be able to play a symphony or whatever but when it comes to taking music from their soul and bringing it from themselves to people listening, it really is quite narrow.

UG: Dave Mustaine is a very talented guitar player but he’s probably not the easiest person to play alongside.

UG: When you talk about the actual theater element of a live show, nobody did that better than KISS. You’ve been a huge KISS fan forever, right?

MF: There are so many guitar players that started from KISS. The great thing about music is everybody has the right to their own opinion and that’s what makes it interesting. I used to play with Jason Becker and he was the biggest Bob Dylan fan in the world. And to me, I’d rather chew glass than listen to Bob Dylan. But that was fine. You’ve got to have those differences in opinions. There are certainly no good and no bad in music. It’s all what it means to you. It has nothing to do with tonality or pitch or talent or tone or any of those things. It everything to do with the experiences in your life around this music.

MF: I’m not a huge fan of hardcore rap and stuff, but then at the same time, you have to respect any artist or anybody who can make hundreds and thousands and millions of people happy with what they do. Here’s one that will get ya. There are so many guitar players that started from Hendrix? I’d rather chew glass than listen to Hendrix.

UG: That is so weird to hear you say that. I don’t know if I’ve ever talked to a guitarist who didn’t love Jimi.

MF: I never got Hendrix. When I think of Hendrix, an image comes in my mind about a lot of hippies rolling around in mud tripping on acid and it just doesn’t turn me on at all. And all that noise and feedback and I’m like, “Play in tune.” I’m a big tuning guy and that’s probably why I don’t like Dylan because things go out of tune and it kills me. But then again, all of my favorite guitarists hail Hendrix. I’m a big Uli Jon Roth fan and he’s the most beautiful guitarist. He probably loves Hendrix as much as Hendrix’s own mother does. All the guys I respect love Hendrix so I know there’s something there. It’s just that I never got it because it never fit into my experiences.