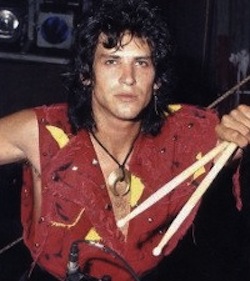 In a statement on their website, the band writes, “We are saddened to report to you that our ex-Krokus drummer Dani Crivelli passed away. Our sincere condolences to his family and loved ones. Also a native of Solothurn, Switzerland, Dani joined Krokus in 1987, replacing Jeff Klaven. You can listen to him on the band’s 1988 Heart Attack release that included Krokus staples like Rock’n’Roll Tonight” and Wild Love.”

They added, “He always kept in contact with the band over the years. We liked his straight forward, but true words about music and life. He will be missed but will keep on drumming in Rock’n’Roll heaven!”

Crivelli played in a band called Ain’t Dead Yet with fellow Krokus members Many Maurer and Tony Castell before joining Krokus in 1987, where he remained until 1989.

According to Ultimate Classic Rock, the cause of death is unknown.