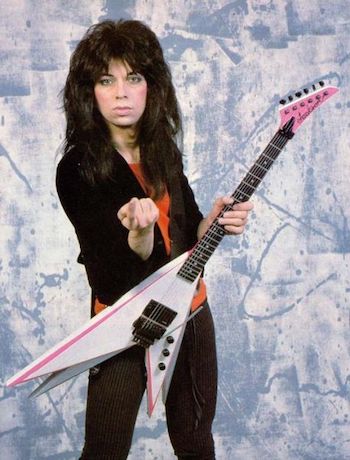 In a recent interview with The Aquarian Weekly, KISS” Gene Simmons said he would never work with former guitarist, Vinny Vincent, ever again.

Simmons stated, “No. No. He’s a very talented guy. Everybody’s got their troubles in life. You can’t fix everything. I’m a big supporter of his talent. You know, go with god. Enjoy life, be happy. But I don’t need more dark clouds over my life. It’s nice and calm. Eric [Singer, KISS drummer] and Tommy [Thayer, guitar] have been with us for a very long time, and it’s professional to the highest degree. Everybody is happy to be together. Everybody shows up on time. There’s no, ‘The dog ate my homework.’ None of that crap.

“When you use drugs and alcohol and other bullshit things, it’s everybody else’s fault,” he continued. “You’re always the victim. You never take charge of your situation, and I’m sick of it. I don’t tolerate any of that. I won’t have any of those losers around in my life. That includes regular people too. If somebody I work with in other areas drinks, they’re gone. By the way, they don’t care about you. They just want what they want.”

“It’s a shame,” Simmons added. “He’s talented beyond most people that you’d meet, but you get to sleep in the bed you make.”

Vincent has released a statement responding to Simmons’ comments:

“I love and respect Gene Simmons like a brother, and have nothing but the fondest of memories working with him and Paul Stanley. Ours was a very special chemistry. We made one hell of a great band, and the magic we made together is timeless. I am proud of our work and the songs we wrote that appeared on the Creatures of the Night, Lick It Up and Revenge albums that became KISS classics, and are staples of their live shows to this day. We brought happiness to the fans with performances and songs that will live on. I am appearing in person at the Atlanta KISS Expo to celebrate KISS, embrace our music and our time, and share goodwill with the fans. And for all of the above, I wish both Gene and Paul nothing but the best.”

For more information about the Atlanta KISS Expo, and Vincent’s appearance, please go to here.

SONS OF APOLLO ANNOUNCES FIRST STRING OF U.S. SHOWS AS PART OF WORLDWIDE TOUR IN SUPPORT OF “PSYCHOTIC SYMPHONY” ALBUM ›