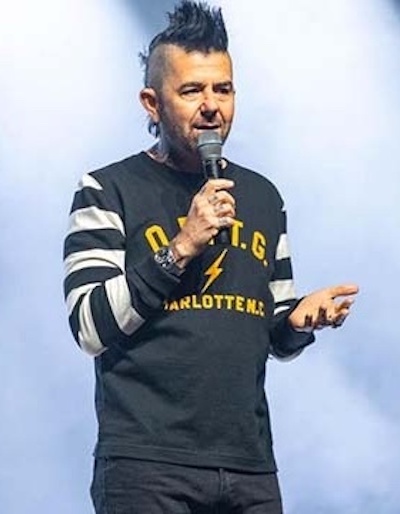 Greg Prato of AllMusic spoke with former MTV Headbanger’s Ball host Rikki Ratchman about his one man show, highlights from discussion appear below.

AllMusic: What can fans expect from your one-man show?

Rachtman: I think they are going to get what they expect in the way of hearing some first-hand experiences with some of these incredible moments in rock n’ roll – whether it be what was it like on Headbangers Ball at the water park with Alice in Chains, or with Nirvana. And they’re also going to hear the stories from the Cathouse.

Somebody that saw the first show said that they were surprised it was so inspiring – which I didn’t think about it like that, but it was very, very flattering. I think the whole show is unexpected. But, if you’re expecting to hear some great rock n’ roll stories, you’ll hear that as well.

AllMusic: Are there plans to do further shows into 2023?

AllMusic: Is it true that a certain famous singer helped you land the Headbangers Ball gig?

Rachtman: Absolutely. To say would I have gotten the job if it wasn’t for [Guns N’ Roses frontman] Axl Rose? Probably not. Because he was the one that suggested I do it, and Axl said, ‘Do you want me to go to New York with you when you audition?’ And I’m like ‘OK!’ He got the hotel room and we stayed in a really nice hotel. He decided to ‘slum it’ and fly business class and we went to New York.

And I just remember back then, when you travel with a big rock star and you get off the plane, somebody escorts you to a different area the airport, and you get into a car. It was like kind of cool.

AllMusic: Who were your favorite guests on Headbangers Ball?

Rachtman: I think the shows that people remember the most are the shows that were the best. Obviously, any time I got to spend time with [Motörhead‘s] Lemmy [Kilmister] was a joy. And Lemmy was somebody that I spent a lot of time with when we weren’t on MTV.

But the shows that people remember the most are the Alice in Chains shows, Pantera…even though people want to believe there was this real big feud between me and [Megadeth frontman] Dave Mustaine, Dave Mustaine was always great because he always kept me on my toes, because I knew he was going to give me a hard time but it was always fun.

I’ll never forget interviewing Brian Johnson from AC/DC. I’m sitting there talking to Brian Johnson and him saying to me, ‘Well, now if I see you because we’re friends…’ and I was just like, ‘Did Brian Johnson just called me ‘a friend’?!’

I am not a journalist, I’m not a reporter – never really been accused of being one. I’m nothing but a glorified rock fan that had the greatest job in the world…And to be in a position where these bands…the ‘Cathouse era ‘ was different, because at the Cathouse, I became friends with most of these bands before they even had record deals. But to meet legendary masters, to all of a sudden be in Brazil hanging out with [Judas Priest singer] Rob Halford, I’m like, ‘This is kind of like the coolest thing in the world…’

AllMusic: There is a popular belief that grunge killed metal, or rather, hair metal. But if you watch some of the Headbangers Ball shows from ’92/’93 on YouTube, you see that it was still a pretty wide variety of videos that were being shown.

Rachtman: I’m just gonna make this up and let’s just see if this analogy even works. If heavy metal in the ’90s was a person, you would like to think that that person was a bad ass. That person was tough. And that person is huge and strong. And all of a sudden, this new type of music comes on and pushes you aside. Well, that means that your music is not that strong.

Do I believe that grunge killed metal? Absolutely not. I don’t believe that for a little bit. Because I don’t think metal ever died…

…If you think that people would still be looking and dressing like Warrant and Poison if there wasn’t grunge – no. That was something that was an era and it was a fashion and it was a type. And a lot of the bands of that era – and I get a lot of crap for this – were very weak, and didn’t have any substance. And sometimes, bands like Cinderella – that were so incredibly amazing – got pigeonholed into being some of these ‘fluffy bands’ that didn’t have any substance.

Bands like Cinderella and Skid Row are just killer, kickass rock bands. And because both those bands broke up…things change. It’s like saying if all of a sudden everybody’s drinking a certain type of beverage instead of another, hey it’s a new flavor and people like it. But nothing killed heavy metal.

I went and I saw WASP a couple nights ago, and it was packed. So, obviously metal is not dead. And if I would go see Alice in Chains, it’s packed and they’re selling out arenas. So, I don’t believe that anything killed anything. I think this type of music would have died out on its own if it wasn’t substantial and had enough meat to it.

Why don’t people say that Guns N’ Roses was hair metal? Because Guns N’ Roses never stopped playing – they became one of the biggest rock’n’roll bands in the world. And to prove that it was never dead, if it died, then how did the Stadium Tour [with Def Leppard, Mötley Crüe, Poison and Joan Jett] do as well as it did? This music has never died. To say that grunge killed it is to insinuate that it’s dead…

Things come in waves, and the people that like metal are still going to metal shows…a true fan never stopped going to see Iron Maiden. A true fan still supports that type of music – no matter what happened. And yes, does it sometimes not have the luster and the shiny newness that it once did? Yeah, that happened. But it didn’t happen because of certain type of sound out of Seattle.

AllMusic: Did you have any say in which videos would be played on Headbangers Ball?

Rachtman: None. Ever. In my entire time on the Headbangers Ball, I got one video picked to play – and it’s probably because they were going to play it anyway. I was like, ‘It’s my birthday. Can I pick the videos?’ And they’re like, ‘You can pick one video, that we already play.’ And I’m like, ‘Motörhead. Just play a Motörhead video for my birthday.’

…And because there the music fanbase was so broad, because you had just as many people that wanted to hear, y’know…Warrant, that wanted to hear Nuclear Assault. I mean, you had all these people wanting to hear the different genres, and a lot of these bands need[ed] to be played, because this is the only place to play them. That was why I believe we never should have played any videos that were being played during the daytime.

AllMusic: What were some of your favorite videos that were played at the time?

Rachtman: My favorite band always has been Motörhead. I love Motörhead. I’ve got Motörhead tattoos. I can’t say enough about the band Motörhead. But during my era on Headbangers Ball, I loved Danzig, I loved Suicidal Tendencies, I loved Megadeth. I mean, these are all bands I still listen to, but videos that I remember going to like, ‘Hey, now we’ve got something from Suicidal or Danzig,’ and I also liked bands like the London Quireboys – which were a very Rod Stewart/The Faces type band. And I still got love for my brothers Faster Pussycat, and some of the LA bands.

AllMusic: How important was Headbangers Ball in breaking bands, and also, could a show like that have the same impact today?

Rachtman: It was vital in breaking bands. I hear it all the time, people saying, ‘Riki, you turned me on to Pantera.’ Which, I appreciate it, but I don’t believe I should take credit – because I was just a host…

Now, we can pick up our phone and say, ‘Show me a video from Megadeth,’ and we’re gonna see them instantly. Which because of that and that instant fulfillment of what we want, we’re not going to get turned on to new stuff as much. Which is kind of a shame. If you wanted to see a video from Pantera on Headbangers Ball, you watched Headbangers Ball, and you’re going to see other bands during that time that you wouldn’t have known about. And now, if there’s something that you don’t know about – scroll, pass, delete…