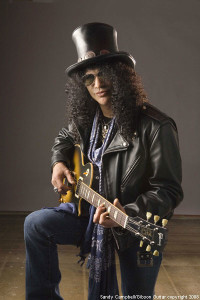 Blabbermouth.net reports that former Guns N’ Roses guitarist Slash has confirmed that he has rekindled his friendship with the band’s lead singer Axl Rose — six years after the frontman called him “a cancer.”

Speaking to Aftonbladet TV in Sweden (see the video below), where Slash was making a special appearance on Friday (August 21st) for a launch event for the Marshall London phone, the guitarist said of his restored relationship with Axl. “It was probably way overdue, you know. But it’s…. you know, it’s very cool at this point. You know, let some of that, sort of, negative… dispel some of that negative stuff that was going on for so long.”

Asked if his warmer relationship with Axl will lead to a reunion of Guns N’ Roses’ classic lineup, Slash said, “Oh, I couldn’t answer that one, though…” Pressed on why that is, Slash replied, “All right, let’s get off the subject, ’cause, you know, that’s an old one.”

Slash was asked about the possibility of a reunion of the classic Guns N’ Roses lineup on the May 7th edition of CBS This Morning and gave a somewhat surprising answer. He replied, “I’ve got to be careful what I say there. I mean, if everybody wanted to do it and do it for the right reasons, I think the fans would love it. I think it might be fun at some point to try and do that.”

Asked what the “right reasons” might be, Slash said, “I mean, that’s a hard one. That just starts to get into a whole complex thing… It’s really between the guys in the band.” But pressed on whether he thought it was likely, Slash said, “Never say never.”

‹ DRUMMER BILL WARD SAYS THAT “SHARON [OSBOURNE] DEFINITELY DISLIKES ME, AND SHE HAS FOR A LONG, LONG TIME”