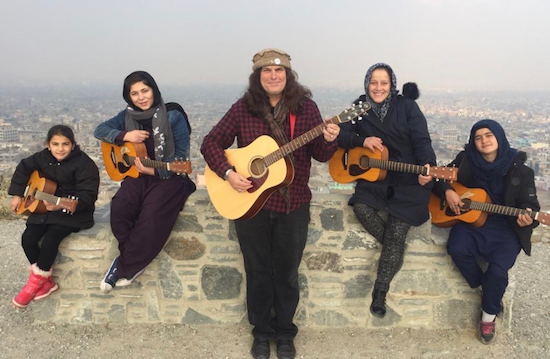 For the last six years, The Miraculous Love Kids, a non-profit, 501(c)(3) organization established by musician Lanny Cordola (Giuffria, House Of Lords), has served as Afghanistan’s ONLY school of music specifically for war-torn, poverty-stricken girls and young women.

The current circumstances in Afghanistan have placed the organization and its members in an extremely difficult position, prompting an appeal to the world for assistance. The following statement details the group’s dire situation and a plea for help:

“Today our lives are in great danger as the success we achieved in becoming part of Afghanistan’s cultural scene has now marked us for persecution and even death by the Taliban.

What began in 2015 with three girls has grown to nearly 200 students learning music as well as basic reading, math and life skills — all funded entirely by grassroots donations.

We have recorded music with Brian Wilson of the Beach Boys, Tom Morello, Sammy Hagar, Nick Cave, Blake Shelton, and many others. (See a previously posted story here, with a performance of the Eurytyhmics number-one hit Sweet Dreams_

We have appeared on Afghanistan’s most popular TV shows and performed publicly before the country’s First Lady.

ABC, The BBC and Rolling Stone and and other media outlets have shared our story with the world.

Now, with the Taliban’s rapid takeover of Kabul, we are literally in hiding, with our most senior students in particular danger. Our school is closed, and many of the people who were supposed to protect us now see us as a bargaining chip to gain favor or even a bounty from the Taliban. As girls playing Western music with our American male teacher Lanny Cordola, we could not be at greater risk.

We appeal to the international community, to diplomats, politicians, news media, and NGOs working to evacuate civilians under threat, to please find a way to get as many of us on planes leaving Afghanistan to safety. Time is imperative as the airlift is scheduled to end, which would leave us here without hope.

f you have any contacts with military or security personnel who are helping to arrange safe passage to the airport and seats on planes, please contact Lanny Cordola, who is currently in Islamabad, Pakistan. He can be reached 24 hours a day by telephone at +1-562-209-3769 and email at lcordola19@gmail.com.

We pray that the international community will not abandon us to a fate that will almost surely be death.”