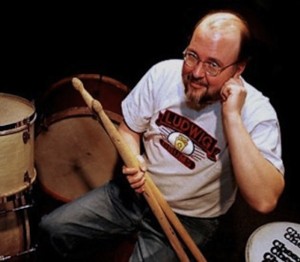 “You know what happens with bands. Usually it’s a woman or something. It’s usually sex, drugs or money. When the lawsuits got filed, it ended up to be money.”

That’s how drummer Bun E. Carlos sums up his recent disagreements with the other members of Cheap Trick, who threatened to send the former bandmates in front of a judge before Carlos ultimately decided to settle. In a new interview with Classic Rock Revisited, Carlos commented on his current status with the group, which leaves him out of the recording or touring lineups, but allows him to continue to hold a 25 percent stake in their shared business interests.

“In 2010, I got notified and was told, basically, to not show up for the next gig,” Carlos explained. “One guy doesn’t want me there, and the other guys were fine with that. They asked if they could use my drums. I said, ‘Yeah, go ahead and then send them back to me, please.’ That is basically what happened.”

Laughing that he “must have pissed somebody off,” Carlos maintained that everything’s technically settled between himself and the remaining members of the band, but he allowed that the way he was bumped aside — and the financial arguments that followed — have complicated his feelings regarding Cheap Trick.

“Looking back on it, the way I was treated by their people was really an insult,” said Carlos. “The music speaks for itself. You either like it or you don’t, or you’re somewhere in between. That doesn’t change whether I’m in the band or not. The legacy doesn’t change because of that. I get asked around town if I still talk to these guys and if I am still good friends with them. I just go, ‘Well, you know, good friends don’t have to sue their friends in federal court.’ As far as being good friends, well … there you go.”

These days, Carlos isn’t recording or touring with Cheap Trick, but he’s still keeping busy musically. “These days I mess around locally with a couple of bands. We play around town and that is something to do,” he said when asked to talk about his current activities. “I practice every day and that kind of stuff to maintain my musicianship. I’m still involved in the business of Cheap Trick, so I keep my eye on that kind of stuff.”

KISS’ PAUL STANLEY DEBUTS HIS SIDE PROJECT, SOUL STATION, AT THE ROXY THEATRE ON SEPTEMBER 11TH ›