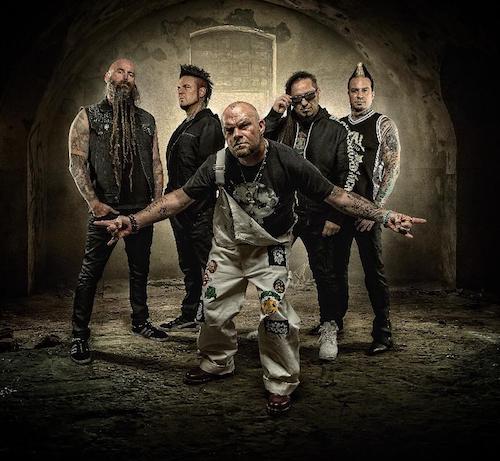 Five Finger Death Punch have premiered the new video for the song Sham Pain, off their forthcoming new album And Justice For None due out Friday, May 18th.

“Sham Pain is a lyrical snapshot of probably the most chaotic, yet the biggest year of our career,” says guitarist Zoltan Bathory. “So far, we’ve come out of every bear attack relatively un-scraped, and the band is tighter than ever. Life is not so difficult if you don’t take yourself sooo seriously. As long as you can find the humor in everything you are winning and the winning is strong with this video, as it follows the footsteps of our NOscar winning masterpiece Jekyll and Hyde. It was a simple process: We lit the set on fire and then made our poor director Rob Anderson’s artistic sense into a piñata. Whatever he could salvage became the music video.”

Watch the video for Sham Pain below.

Released on April 20th, Sham Pain reached the #2 slot on iTunes’ Metal Songs chart and debuted Top 10 on the U.S. Rock Song Chart. To date, the song has received over 2 million streams in its first two weeks of release. The song is currently charting at #35 on the Active Rock airplay chart, a full week ahead of its official add date. Gone Away, the band’s previous single (and cover of The Offspring’s 1997 hit single) continues to chart at #5 on Active Rock radio. Gone Away has received over 30 million streams in the U.S. and has sold over 100,000 downloads.

With their customary airtight riffs, muscular grooves and seismic melodies, Five Finger Death Punch maintain their signature intensity, all while pushing themselves into new territories on And Justice For None,. And Justice For None, marks the multi-platinum hard rock band’s seventh studio album and is available for physical and digital pre-order here.

5FDP will be hitting the road for a massive series of co-headlining North American dates with Breaking Benjamin this summer, along with special guests Nothing More and Bad Wolves. The summer amphitheater tour, co-produced by Live Nation and Frank Productions, kicks off on July 16, 2018 in Seattle, WA and will make stops in 32 North American cities. For tickets to the biggest, can’t-be-missed rock event of the summer, VIP offerings and more info on the tour go here.