FAMED PRODUCER ANDY JOHNS DEAD AT THE AGE OF 61 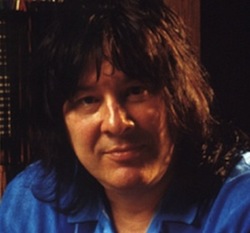 Andy Johns, the veteran producer and engineer who worked on classic albums by Led Zeppelin, the Rolling Stones, Jimi Hendrix, Van Halen and many others, has died at the age of 61. The news was confirmed to Billboard.biz by guitarist Stacy Blades, who was working on an untitled project with Johns until the producer was hospitalized last week.

No cause of death was immediately available for the British-born Johns, the younger brother and uncle, respectively, of fellow producer/engineers Glyn Johns and Ethan Johns. However, Blades said liver trouble was one reason why Johns had been hospitalized.

Twitter quickly filled up with tributes: Red Hot Chili Peppers and Chickenfoot drummer Chad Smith wrote that Johns “made some of my favorite all time records,” while former Deep Purple and Black Sabbath member Glenn Hughes tweeted “Larger than life-You are loved Andy.” Former Go-Gos member Kathy Valentine’s advice was to “Crank up #ExileOnMainStreet and help send his soul off to the big mixing board in the sky.”

Born in Surrey and a student at the King’s School in Gloucester, Johns put aside an early ambition “to be the next greatest bass player of all time” to follow his brother into the studio world. “It looked a lot better than working,” Johns told Universal Audio. He began his career as a tape operator at London’s famed Olympic Studios, helping Eddie Kramer on sessions for the Jimi Hendrix Experience’s Axis Bold as Love.

“In those days you could go into one studio and Joe Cocker was working, and then you’re working with Jimi Hendrix in Studio One, or down the corridor Eric Clapton is doing something,” Johns recalled. “It was a serious center. A lot of talent was there.” Johns produced early albums by Blodwyn Pig (Ahead Rings Out), Humble Pie (As Safe As Yesterday Is, Town and Country) and Free (Free, Free Live!, Heartbreaker), as well as Television’s landmark Marquee Moon in 1977.

Johns’ engineering resume, meanwhile, was dotted with landmark sets by the Stones — including Sticky Fingers, Exile On Main Street, Goats Head Soup and It’s Only Rock ‘n’ Roll — Led Zeppelin’s II through Physical Graffiti as well as albums by Mott the Hoople, Jethro Tull and many more. Johns relocated to Los Angeles during the 1970s, where he worked with Van Halen, Joni Michell, Ozzy Osbourne, Cinderella and Eddie Money. Over the past dozen years he worked on albums by Hughes, Godsmack, Taylor Hawkins & the Coattail Riders and others.

Johns once told music tech blogger Bobby Owsinski that the key to his approach was taking a total overview to the sound of a piece. “I don’t build mixes…I start with everything,” Johns explained. “Most of the people that listen to and tweak one instrument at a time get crap. You’ve just got to go through it with the whole thing up because every sound affects every other sound.”

Johns also told Universal Audio that to him “fidelity is obviously of prime importance. My idea is to make it sound as if you are in the best rehearsal that the band ever did, and you are about 12 feet back from the stage, in a nice rehearsal place…You’re supposed to be there and feel them playing.”

Joe Satriani recalled that Johns’ philosophy was key to Chickenfoot’s 2009 debut album. “He was great at capturing very evocative performances,” Satriani said. “He was great at capturing the chemistry between rhythm sections, and he knew exactly how to layer rhythm guitars. He knew when you just needed one or if you need 15. I was all about the composition and the band. Andy always knew when there was something good to record, and when he didn’t like something he would tell you that you were full of sh– and leave the room — which was good, too, because sometimes you need somebody to set you straight.”

Steve Miller said Johns inspired his last two Steve Miller Band albums, 2010’s Bingo! and 2011’s Let Your Hair Down, which were recorded at George Lucas’ Skywalker Studios. “Andy and I were working on a live concert DVD that he was mixing (2007’s Live From Chicago),” Miller remembers, “and he said, ‘Boy, I would really love to do a guitar album with you.’ The next thing you know, we go into Skywalker and cut 42 tracks. And doing guitar overdubs with Andy is so much fun, you never want it to end. It was like back in the early days when we were making records in England. He’s the monster man for all the Led Zeppelin records and the Stones and stuff. He’s just a great engineer and a really good co-producer to work with.”

Johns’ sons also went into music: singer-songwriter Will Johns has released a pair of albums, including 2012’s Hooks and Lines; while Evan Johns played drums in the band Hurt.

Funeral arrangements for Johns were pending at press time.