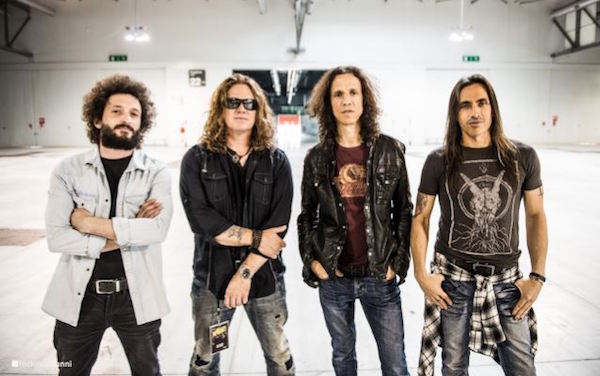 Last year marked the 25th anniversary of Extreme’s classic multi-Platinum, Grammy® nominated, Pornograffitti, the definitive album of the band’s career. To mark the anniversary, Pornograffitti Live 25/Metal Meltdown will be released October 14th by the award-winning production company Rock Fuel Media in association with Loud & Proud Records as part of their four-part “Metal Meltdown” DVD series. The concert film captures the Boston band performing the album Pornograffitti in its entirety.

Directed by Brian Lockwood (Bon Jovi, Metallica, Motley Crue), the Pornograffitti Live 25/Metal Meltdown package includes a Blu-ray, DVD, and audio CD of the complete concert that was filmed on May 30th, 2015 at The Joint at the world famous Hard Rock Casino in Las Vegas. It also features Rockshow, a bonus documentary that takes fans through Extreme’s story, with exclusive interviews, ‘80s archive footage, and an exclusive photo gallery. Mixed in 5.1 Surround Sound, it’s now set for release October 14. A trailer can be seen below.

“It was a great thrill to perform Pornograffitti in its entirety,” says singer Gary Cherone. “Some of these songs were never played live before so we had to go back and relearn them for the tour. The album was a watershed moment in the bands career…it’s when we came in to our own and it will always be special.”

As guitar virtuoso Nuno Bettencourt continues, “The band always prided itself on its live performance. Over the years, some of these songs have evolved where the band actually plays them better now than when we had recorded them. Hope you enjoy it.”

Award-winning producer Barry Summers of Rock Fuel Media commented, “It was a real privilege to produce Pornograffitti Live 25/Metal Meltdown in celebration of Pornograffitti, to have the opportunity to work first-hand with such high caliber musicians and audio purists. Over 25 years after this iconic album was released, we captured the band at their very best. Watching Nuno Bettencourt’s off-the-charts guitar solos is simply mind-blowing, as confirmed by Queen’s Brian May and Aerosmith’s Steven Tyler, whom we filmed paying homage to the Guitar God himself in the RockShow documentary. One of the highlights of the documentary is a moment where Gary and Nuno are sitting on the doorstep of Gary’s childhood home, and they perform a spontaneous version of More Than Words.

Extreme achieved their greatest success with their 1990 album Pornograffitti, which peaked at #10 on the Billboard’s “Top 200 Albums” chart, and was certified multi-Platinum. Musically, Pornograffitti is dominated by blistering guitar riffs, often with funky, syncopated timing, and incendiary, high-speed rock/metal solos. The record provided Bettencourt with widespread admiration from rock guitar enthusiasts and continual exposure in leading guitar playing publications. But it was the acoustic ballad single, More Than Words, that reached #1 on Billboard’s “Hot 100” chart and was nominated for a Grammy® Award for “Pop Performance By A Duo Or Group With Vocal.” The subsequent single, Hole Hearted, another acoustic track, was also successful, rising to #4 on the same chart. Decadence Dance and Get the Funk Out were also released as singles both landing on Billboard’s Rock chart and becoming fan favorites.

To date, the Grammy-nominated Extreme have released five albums, plus a greatest hits set—selling over 10 million records worldwide. The band’s trademark sound is a mix of hard rock funk in the spirit and style of their predecessors Led Zeppelin, Aerosmith, Queen and Van Halen—fueled by Bettencourt’s signature guitar flights and Cherone’s resonant vocals—and matched with a social consciousness in their lyrics.

* Songs do not appear on the audio CD.