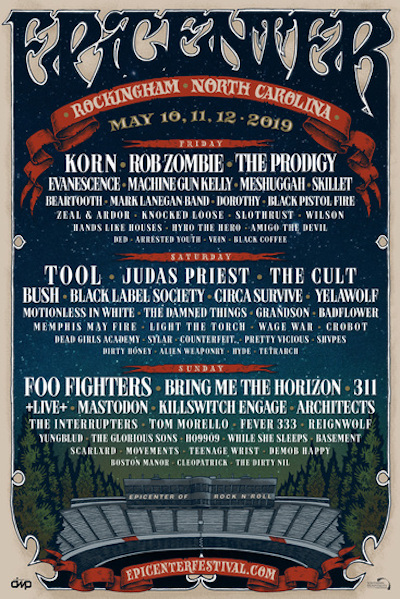 Here’s what the guys had to say about this rare appearance:

“The rants, the debates, the rock star interviews and yes…Stump The Trunk are back.  May 10th and 11th, the 3 amigos of That Metal Show will be live onstage at the country’s biggest rock festival–Epicenter–and we couldn’t be more stoked. The Boys Are Back In Town!”  -– Ed, Don & Jim

The inaugural festival, which takes place in the heart of the Mid-Atlantic region, will also feature sets from Rob Zombie, Judas Priest, Bring Me The Horizon, The Prodigy, The Cult, 311, Evanescence, Bush, +Live+ and dozens more. The expansive Rockingham Festival Grounds–being developed in coordination with Rockingham Dragway, The Rock (Rockingham Speedway), and other local land owners–promise nonstop entertainment, extensive camping options, and no curfew.

The Interrupters, Light The Torch, Ded, Dead Girls Academy and Tetrarch have also been added to the bill, which will include over 65 music acts performing on four stages, led by Foo Fighters, Tool and Korn.

General Admission, VIP tickets, and hotel and camping packages for Epicenter are on sale now at http://EpicenterFestival.com.

The daily music lineup for Epicenter Festival is as follows (subject to change):

Camping at Epicenter will let patrons keep the rock n’ roll party going all through the weekend and will set this festival apart from other U.S. rock shows. Camping spots are connected to the festival grounds and include perks like access to showers, portable restrooms, food and drink vendors, charging stations, information and medical services, as well as a Thursday night pre-show party.

Rockingham Village, an impressive promenade conveniently located immediately in front of the venue, adjacent to the North Premium campgrounds, will be open to campers and other festivalgoers until 2:00 AM daily. Featured vendors at Rockingham Village will include festival merchandise, artist merchandise, lockers for rent, lifestyle shopping booths, a full General Store, coffee shop, craft beer at Headbangers Beer Bar, Caduceus wine bar, breakfast vendors for campers, as well as late night food served after the main venue closes. The Village will also have a stage featuring cover bands and Hellzapoppin Circus SideShow performances throughout the weekend.

‹ FORMER TNT FRONTMAN, TONY HARNELL, SAYS GRUNGE MUSIC WAS NOT RESPONSIBLE FOR THE TERMINATION OF THE ’80S METAL SCENE