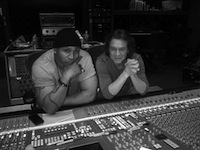 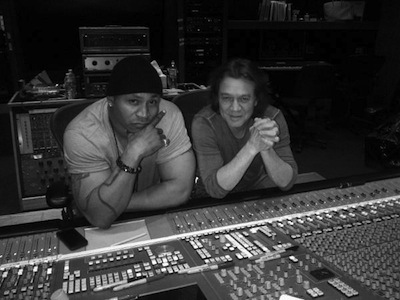 Music legends, Eddie Van Halen and LL Cool J, have teamed up for two songs on LL’s upcoming new album Authentic which will be released on April 30th. The rock icon joined the legendary rapper in the studio and kicked the volume up to create two genre defying songs on LL’s powerful new album.

The first track, We’re The Greatest, can best be described as a thunderous rock/rap anthem which includes symbolic lyrics, frenetic, over the top guitar licks played with reckless abandon and solid drum beats. The song was co-written and co-produced by LL Cool J and Eddie Van Halen at Henson Studios in Hollywood California and features Travis Barker of Blink 182 on drums.

When asked why he choose to reach out to the iconic guitarist, LL Cool J replied, “This Album was born out of my true love for music and I knew Eddie shared that same vision for authentic music. I approached this song with the upmost respect for Eddie and his fans, and became friends with him through the process. I was humbled to watch a genius at work and collaborate with such a legendary and visionary artist as Eddie Van Halen, and to bring our two worlds together, was an exciting opportunity. I am thrilled he was up for the ride.”

Eddie Van Halen didn’t know what to think initially of LL Cool J’S invitation, but once he met the legendary rapper they instantly hit it off and he not only enthusiastically agreed to collaborate on We’re The Greatest, but to also play a solo on the track Not Leaving You Tonight which features Fitz and the Tantrums.

“The thought of me playing guitar to hip hop was definitely left of center, but I was intrigued and I agreed to meet and listen to what he had. I was not only inspired by the songs I heard, but LL’s enthusiasm, his down to earth personality, the freedom he gave me to co-create and his willingness to, for the very first time, sing the chorus on We’re The Greatest. It was like a breath of fresh air that I needed as an artist and an individual.”

Eddie commented further by saying, “the diversity of the songs on this album and the other artists he has collaborated with is outstanding, appealing to multiple genres of music and maybe even creating a few of our own. I feel blessed to not only have had the opportunity to work with LL but also to call him a great friend.”

This is not the first time the guitarist has teamed up with an artist outside of his genre. In 1984 his guitar solo on Michael Jackson’s Beat It has been praised for adding “the greatest guitar solo”, aiding “Beat It” into becoming one of the biggest selling singles of all time.